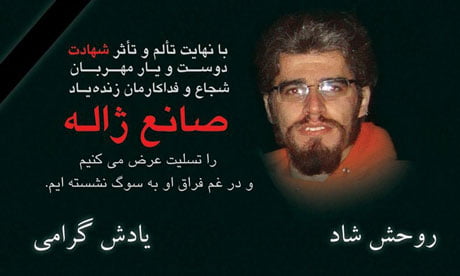 for Saane Zhaleh, created by his classmates at Tehran University of Arts. Photograph: from Saeed Kamali DehghanThe Iranian regime has been accused of hijacking the death of a young pro-democracy protester killed during rallies in Tehran on Monday.

A family member of Saane Zhaleh, a 26-year-old theatre student at Tehran University of Arts, told the Guardian that the Iranian authorities had launched a campaign to depict the pro-opposition protester as a member of the government-sponsored basiji militia who had been killed by what they described as terrorists.

“They [security forces] have killed him and now they want to hijack his dead body and exploit his funeral for their own purposes. His family is totally devastated and inundated in sorrow,” said the family member, who asked not to be identified.

Opposition websites reported that two protesters were killed in clashes between security forces and thousands of defiant protesters who marched in a banned rally organised by the leaders of the green movement on Monday.

Iranian state news agencies later identified them as Zhaleh, a member of Iran‘s Kurd and Sunni minority, and 22-year-old Mohammad Mokhtari, but blamed the opposition for their death.

Iran’s semi-official FARS news agency published a basiji identity card that it said belonged to Zhaleh, but the opposition immediately questioned its authenticity. In response, activists sympathetic to the green movement published a photo of Zhaleh on social networking websites that showed him in a meeting with grand Ayatollah Montazeri, a leading opposition figure who died in 2009.

Authorities staged a funeral at the Tehran University of Arts but did not permit Zhaleh’s family to attend. Witnesses told opposition websites that the hundreds of basiji members who were bussed in to the university to participate in the funeral outnumbered the students and clashed with them.

According to the family member, Zhaleh’s parents and siblings – who live in the western city of Paveh in Kermanshah province – were asked not to attend the funeral in Tehran and were threatened that Zhaleh’s body would not be handed to them if they spoke to foreign media.

“Zhaleh’s family are under pressure not to deny the way the officials have portrayed him. His father was forced to give a short interview to the state television. The authorities are depicting him completely upside down, they have silenced the family by threatening not to hand over his body,” the family member said.

At the same time, Sajad Rezaee, a member of the Islamic Society student group at Tehran University of Arts, told Kaleme.org, the official website of Mir Hossein Mousavi, that the dead protester was not a member of the basij but was a pro-Mousavi activist during the 2009 election campaign.

Shahabaddin Sheikhi, a Kurdish journalist based in Germany, said: “The authorities’ handling of Zhaleh’s death reminds me of that of Neda Agha Soltan, the girl whose story took the world’s attention. In Neda’s case, they also tried to portray her as pro-regime demonstrator and they lied several times to impose their own version of the story but that finally did not prevail. Same thing is happening with Zhaleh because they are afraid of the world’s reaction and also the reaction of the people inside the country. They can not get rid of this disgrace and taint easily.”

Monday’s protest, inspired by the uprisings in Egypt and Tunisia, marked the Iranian opposition’s first attempt in more than a year to hold anti-government demonstrations.

On Tuesday, the majority of the Iranian parliament called on the Iranian judiciary to put opposition leaders Mousavi and Mehdi Karroubi on trial and sentence them to death. Both leaders of the green movement have been placed under house arrest for the past couple of days.