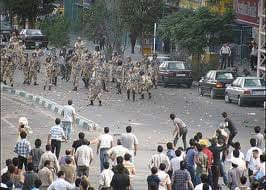 BEIRUT–Tensions escalated in Iran on Tuesday as the biggest anti-government protests in two weeks erupted across the nation in reaction to the arrest of two opposition leaders.

Witnesses said Tuesday’s rallies, scattered across several locations in Tehran and other big cities, were some of the largest and angriest to date. The public appeared fearless and infuriated, witnesses said, fighting back security forces with rocks and defiant chants of “death to the dictator.”

Tuesday’s demonstration comes a day after the families of Mir Hossein Mousavi and Mehdi Karoubi said the opposition leaders were arrested along with their wives. The protests are also part of a new plan by the opposition to challenge Iran’s regime by keeping a street presence every Tuesday for the next few weeks. The protests this Tuesday coincided with Mr.Mousavi’s birthday.

Iran’s government reacted with force, deploying large swats of anti-riot police and plain-clothes Basij militia to crush the crowds armed with batons, tear gas and guns. In several neighborhoods witnesses reported hearing gunshots fired but no reports of casualties had yet surfaced.

In Englelab Avenue in downtown Tehran, the main route for the demonstration, police reportedly smashed car windows out of frustration when protesters wouldn’t back down, several witnesses said.

“The level of anger on both sides was unprecedented,” said a young man from Tehran. He said at one point a team of riot-police had encircled the crowd where he was standing and beat the crowd with electric batons. When protestors shoved them back, they fired in the air, he said.

Iranian judicial authorities denied that Messers Mousavi and Karoubi had been transferred to Heshmatieh jail on Tuesday, according to semi-official Fars News Agency, but confirmed steps were taken to isolate the two men from their supporters.

Iran’s leadership has rejected calls by hardliners to bring the two to trial, fearing that it could serve as a rallying point for the beleaguered opposition’s supporters. The current claims about their detentions, however, could also help to re-energize opposition forces.

Secretary of State Hillary Clinton, speaking at a U.N. human-rights meeting in Geneva on Monday, reiterated her criticism of Iran’s government for its human-rights violations and systematic crackdown on opponents.