The lawyer of an Iranian-British woman convicted on spying charges in Iran has asked that she be released after serving half of her sentence, a request that was immediately rejected by the Tehran prosecutors’office, the state IRNA news agency reported Sunday. 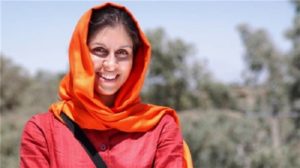 Nazanin Zaghari-Ratcliffe, who works for the Thomson Reuters Foundation, was sentenced to five years for allegedly planning the “soft toppling” of Iran’s government while traveling with her young daughter in Iran at the time. She was was arrested in April 2016. Her sentence has been widely criticized and her family has denied all the allegations against her.

The report by IRNA quoted her lawyer, Mahmoud Behzadi Rad, as saying that he had submitted a request for what Iran’s judiciary calls “conditional release” – when a convict has served half his or her sentence, the person can apply for such a release and the courts have the power to grant it for “good behavior”.

“According to the law, she is entitled to apply for a conditional release,” the lawyer said.

IRNA did not say why the request was denied. Behzadi Rad said he had applied for a conditional release for another of his clients, prominent Iranian human rights activist Narges Mohammadi who is serving a 10-year sentence. Behzadi Rad is her lawyer, too. The request for her release was also denied, he said.

The lawyer also said that Zaghari-Ratcliffe has had several psychiatric evaluations recently while in prison but did not elaborate on her condition or the state of her health.

In England, Zaghari-Ratcliffe’s husband, Richard Ratcliffe, has been leading a campaign to try to win his wife’s release from prison. British officials are also calling for her release.

Zaghari-Ratcliffe went on a 15-day hunger strike in June, to call attention to her plight. In July, she was moved to the mental health ward of Imam Khomeini hospital under the control of the Iranian Revolutionary Guard.

The Free Nazanin Campaign said in a statement at the time that it does not know what treatment she is receiving or how long she is expected to remain in the hospital.

Iran has also detained at least one other Iranian-British national, anthropologist Kameel Ahmady, who has been accused of spying and of links to foreign intelligence agencies.

Iran does not recognize dual nationality for its citizens.

Copyright 2019 The Associated Press. All rights reserved. This material may not be published, broadcast, rewritten or redistributed.

On 3rd of January a news spread in social media regarding Qasem Soleimani and AbuMahdi Mohandes who has died by a US drone strike near Baghdad Airport and this was the end of their lives. In social media, especially Iranian users, there was a chaotic situation, some called of “the general of... END_OF_DOCUMENT_TOKEN_TO_BE_REPLACED