Nov 01, 2018 IRGC News, Politic, Slider Comments Off on Iran Relies on Foreign Militias and Young Shia Muslims to Fight Its War in Syria

Young Shia Muslims to Fight Its War in Syria

In recent weeks, the Trump administration has doubled down on its stance against Iran’s destabilizing role in the Middle East. National Security Advisor John Bolton recently told reporters that the United States will remain in Syria as long as Iran does—to include its proxies and militias—marking a major shift in U.S. policy in Syria. 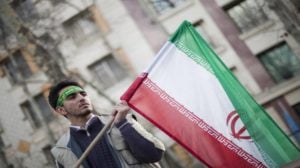 The administration is also ratcheting up its campaign of economic pressure, ending a 1955 treaty with Iran that made exceptions for sanctions on certain products, and warning that after it reinstates some of the United States’ harshest sanctions against Iran in November, it will pursue additional, “tougher” sanctions. The Trump administration has already imposed seventeen rounds of Iran-related sanctions, targeting 147 Iran-related individuals and entities, aimed at coercing the country into abandoning its regional activities.

On October 16, the U.S. Department of Treasury imposed sanctions on a multibillion-dollar financial network that supports the Basij Resistance Force, a paramilitary group which it says recruits and trains child soldiers for Iran’s Islamic Revolutionary Guards Corps (IRGC) to support efforts to prop up the Assad regime, among other malign activities. Tehran was quick to label the move an act of “blind vindictiveness” of the sort that “obstruct the people’s ability to benefit from economic relations with the international community.” The evidence does not suggest, however, that the financial network in question, “Bonyad Taavon Basij” or Basij Cooperative Foundation, in any way benefits the Iranian people.

According to Treasury’s analysis , the Basij Cooperative Foundation employs shell companies to “mask Basij ownership and control over a variety of multibillion-dollar business interests in Iran’s automotive, mining, metals, and banking industries.” By design, the IRGC and Basij are insulated from economic pressure on Iran thanks to external funding from networks of Iran-aligned intermediaries. In addition to their nationally allocated budget ($7.65 billion publicly disclosed for Iranian fiscal year 2017), the IRGC and Basij reportedly accumulate funds through interest-free financial institutions such as Mehr Eqtesad Bank and Bank Mellat (targeted by the new sanctions), which both pay the equivalent of hundreds of millions of dollars annually to the Basij Cooperative Foundation in the forms of dividends, loans and lines of credit, which in turn provide welfare, housing and support to Basij Force members. Basij financial institutions also used their funds to purchase companies through Mehr Eqtesad Iranian Investment Company, which creates a lifeline between the Basij Force and the most lucrative Iranian industries.

On 3rd of January a news spread in social media regarding Qasem Soleimani and AbuMahdi Mohandes who has died by a US drone strike near Baghdad Airport and this was the end of their lives. In social media, especially Iranian users, there was a chaotic situation, some called of “the general of... END_OF_DOCUMENT_TOKEN_TO_BE_REPLACED