Has Iran admitted it bombed Saudi Arabia’s Aramco as a message to Israel?

Dec 03, 2019 editorghazal IRGC, Politics, Quds Force, Slider Comments Off on Has Iran admitted it bombed Saudi Arabia’s Aramco as a message to Israel?

Iran has increasingly accepted responsibility for the September 14 attack on Saudi Arabia’s Aramco oil facilities in Abqaiq and Khurais, doing away with the pretense that it was an attack carried out by Houthi rebels in Yemen. The admission has been made in snippets and leaks, the way a regime like Tehran prefers to send a message. 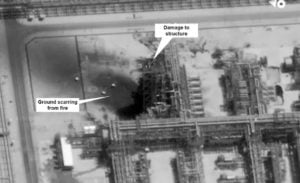 Has Iran admitted it bombed Saudi Arabia’s Aramco as a message to Israel?

Journalist Farid Ahmed Hassan, writing in Al-Watan in an article reprinted in Al-Ain media over the weekend, noted that a recent Reuters article points to a high-level leak from Iran that takes responsibility for the attack.

The early morning attack involved 25 drones and numerous cruise missiles. It was planned and aimed at key oil facilities where there would be no civilians present but would cause extensive damage to the facilities.

The attack was sophisticated, avoiding known air defenses and not triggering a response from Riyadh or the US. This was Iran’s gamble – strike at the heart of Saudi Arabia, and see what the response would be.

Reuters reported last week details from inside the planning rooms behind the attack. The group of planners “included the top echelons of the Islamic Revolutionary Guard Corps (IRGC), an elite branch of the Iranian military whose portfolio includes missile development and covert operations.”

Maj.-Gen. Hossein Salami, leader of the IRGC, led the discussion, saying that it was time to “take out our swords and teach them [the US and its allies] a lesson.” Four people told Reuters this information, according to the report. Reuters also claimed that “hardliners” encouraged an attack on US forces directly. However, Iran’s Supreme Leader Ayatollah Ali Khamenei approved the operation only so long as it avoided hitting any civilians or Americans.

This is a convenient narrative that benefits Iran. It shows Tehran’s military prowess, as well as the way it calculates an operation. It continues the fiction that the regime has “hardliners” and appears to present the elderly Supreme Leader as a “moderate.” But wait a second. How is it possible that four people who were either at the meeting or directly had knowledge of it, told Western media about this? Could it be that the four people familiar with the meeting are all Western intelligence sources? Why would one need four Western intelligence sources in this case?

On 3rd of January a news spread in social media regarding Qasem Soleimani and AbuMahdi Mohandes who has died by a US drone strike near Baghdad Airport and this was the end of their lives. In social media, especially Iranian users, there was a chaotic situation, some called of “the general of... END_OF_DOCUMENT_TOKEN_TO_BE_REPLACED