Fars news agency in Iran is reporting that the Commander of Iran’s Basij (volunteer) force Brigadier General Mohammad Reza Naqdi in a message to the leaders of the Palestinian resistance movements, Hamas and Islamic Jihad, “felicitated them” on their recent victory in the Gaza war against Israel, and pledged that Iran would “arm resistance groups” in the West Bank with maximum power. 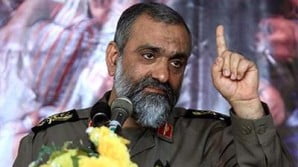 “… we will do our best with full force to arm and equip the resistance, especially in the West Bank,” GeneralNaqdi said in his message to Politburo Chief of the Palestinian Resistance Hamas Movement Khalid Mashal and Secretary-General of the Islamic Jihad Movement Ramadhan Abdullah.

The statements confirm that Iran is waging an undeclared war against Israel by arming the terrorist group Hamas and Islamic Jihad.

It also confirms that Iran is a self declared state sponsor of terrorism.

The Islamic Jihad Movement in Palestine known in the West as simply Palestinian Islamic Jihad (PIJ), is a Palestinian militant organization. The group has been labelled as a terrorist group by the United States, the European Union,the United Kingdom,Japan, Canada, Australia, New Zealand and Israel. Iran is a major financial supporter of the PIJ.

Israeli Embassy in Washington D.C. and officials refused comment in this matter of Iran’s undeclared war against Israel and General Naqdi admission that Iran is facilitating and arming terrorist organization in Gaza, in violation of international law.

Israeli and Palestinian negotiators agreed Tuesday to an Egyptian-brokered cease-fire deal ending seven weeks of fighting. It was the 10th cease-fire in the latest military confrontation between Israel and Hamas, the Islamist movement that rules the Gaza Strip. All but three of the truces lasted their planned duration before dissolving into more violence. Under the latest cease-fire agreement, border crossings between Israel and Gaza are to be opened for the transfer of humanitarian aid and reconstruction supplies.

The accord also calls for the immediate extension of Gaza’s fishing zone from three to six nautical miles.

It is unclear if the rearming of the terrorist organization Hamas and Islamic Jihad violates the terms of the negotiated cease fire. But it is clear that Iran is using that opportunity to rearm both terrorists entities.

On 3rd of January a news spread in social media regarding Qasem Soleimani and AbuMahdi Mohandes who has died by a US drone strike near Baghdad Airport and this was the end of their lives. In social media, especially Iranian users, there was a chaotic situation, some called of “the general of... END_OF_DOCUMENT_TOKEN_TO_BE_REPLACED