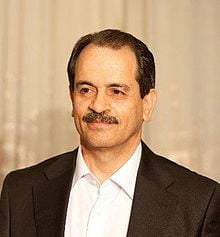 Mohammad-Ali Taheri, the head of the deviated Halqeh Cult was sentenced to five years of prison on charges of insulting sanctities.

After four court sessions in which he defended himself, he was sentenced to five years of prison by the Tehran Public and Revolutionary Court on charges of insulting sanctities, making statements that he had no specialty in and claiming to receive [divine] inspiration and knowledge and presenting these to others.

He was also sentenced to 74 lashes for touching his patients without a medical license. (Tabnak state-run Website, Mashreq state-run daily – Feb. 13, 2012)

(Note: Mohammad-Ali Taheri is one of the founders of the methods of mysticism in Iran. He has been arrested on charges of threatening national security three times since May 2011 by the Revolutionary Guards Corps Intelligence Protection Department.

Dr. Mohammad Ali Taheri is the founder of two medical methods and has a number of honorary Ph.Ds and gold medals from various countries including Belgium, Romania, Russia and South Korea for his scientific and mystic accomplishments.)