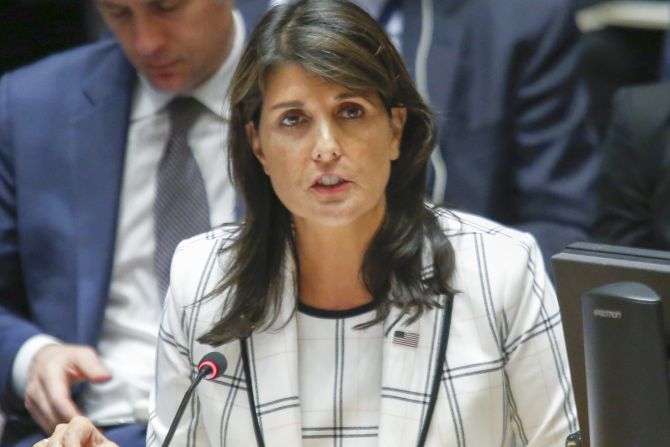 Iran the 'next North Korea', India should re-think ties: Haley

Dubbing Iran as a “threat” and “the next North Korea”, United States Ambassador to the United Nations Nikki Haley on Thursday said her country will encourage India to rethink its relationship with Iran and decide whether it wants to continue doing business with it.

Her remarks assume significance as they come after the US told India and other countries to cut oil imports from Iran to “zero” by November 4 or face sanctions, making it clear that there would be no waivers to anyone.

Haley, on her first visit to India after becoming the US Ambassador to the UN, said in an address that Iran is a “theocratic dictatorship” that abuses its people, funds terrorism, and spreads conflict throughout the Middle East.

The Tehran regime is the hidden, and sometimes not-so-hidden, force behind most of the conflict in the region, she said.

Replying to questions after her address, the 46-year-old Indian-American said she had discussed the issue of India’s business with Iran with Prime Minister Narendra Modi.

“We do have this in terms of our dialogue because I think that India also recognises the threats of Iran. We understand the logistics becoming a play with Iran but we have to always make sure that the priority is peace and security,” Haley said.

Later, in an interview to NDTV, she said India should rethink its relationship with Iran, as the US gets set to impose sanctions against those doing business with Tehran.

“All of us have to rethink who we choose to do business with. I think as a friend India should also decide, is this a country they want to continue doing business with. So, yes I had that conversation with PM Modi. It was a constructive conversation.

“I think for the future of India, future of resources, we would encourage them to rethink their relationship with Iran,” Haley said.

In her address organised by think-tank Observer Research Foundation, Haley said the US would continue to try and work with its partners and allies to make sure that Iran was being pushed to be a good, accountable international neighbour.

Answering a question after her address, she said, “The US wants to be cautious but wants the international community to make sure they are paying attention to the violations.

“And what we are going to continue to do is to keep the pressure on them and we hope that other countries will join us because in our eyes Iran is the next North Korea.”

In her address, Haley said the US strongly believes that Iran is a “threat” and it cannot take its eyes of the country.

“We don’t believe this because of some ideas but we believe because there is proof that in spite of the Iran (nuclear) deal, still with all of those incentives, they continue to violate resolution after resolution.

“Just because countries came to have deal (with Iran), doesn’t mean we should be blind to these violations,” she said.

US President Donald Trump last month announced that his country was withdrawing from the Iran nuclear deal signed by the Obama administration in 2015 under which Tehran had agreed to limit its sensitive nuclear activities and allow in international inspectors in return for the lifting of crippling economic sanctions.