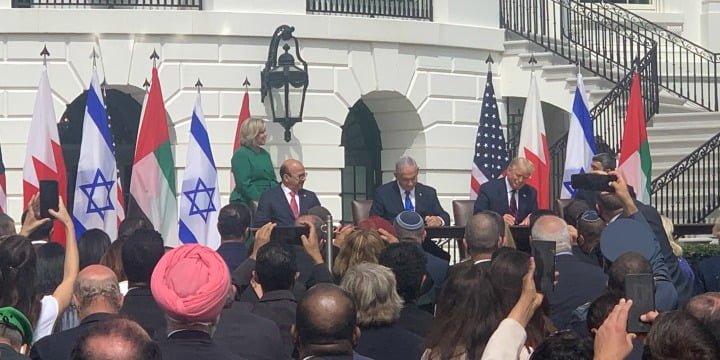 Iran is escalating threats toward the United Arab Emirates (UAE) and Bahrain, after the United States helped broker peace deals between Israel and the two Gulf states.

“Any apparent or clandestine activity by the Israeli intelligence services or their agents in the Islamic Republic or the region, the response will not be directed at the Zionist entity only, and the UAE will be part of the response,” said Iranian deputy House Speaker Hassan Abdel Lahian.

“Alliance with the Zionist regime will put the security of Bahrain and the Emirates at a greater risk than in the past,” a September 13 statement from the Iranian parliament’s National Security and Foreign Policy Commission warned.

“The executioner ruler of Bahrain should await the harsh revenge of the Mujahideen (jihadist fighters) aiming to liberate Quds (Jerusalem) and the proud Muslim nation of this country,” Iran’s terrorist Islamic Revolutionary Guard Corps (IRGC) said in a statement.

Iran has tried to carry out attacks in Bahrain before. And Bahrain foiled a terrorist plot in March 2018, arresting a militant cell comprised of 116 IRGC members. “The network was planning to target Bahraini officials, members of the security services … vital oil facilities and industries, with an aim to disturb security and public order and undermine the national economy,” Bahrain’s Interior Ministry alleged. Iran rejected the Bahraini accusations as “baseless, repetitive accusations.”

Bahrain claimed that IRGC affiliates, including Iraqi militia groups such as Asaib Ahl al-Haq and Lebanese Hezbollah were involved in the foiled attack.

In August, the IRGC threatened the UAE with a “dangerous future” after the country signed its peace deal with Israel.

“They (the UAE) better be mindful,” said Iranian President Hassan Rouhani. “They have committed a huge mistake, a treacherous act. We hope they will realize this and abandon this wrong path.”