Jan 17, 2019 Basij, Politic, Politics, Quds Force, Slider Comments Off on Iran to Keep All Its Forces and Weapons in Syria – Revolutionary Guards Chief 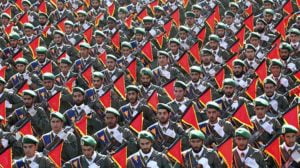 Iran to Keep All Its Forces and Weapons in Syria

The Head of the Islamic Revolutionary Guard Corps, Mohammad Ali Jafari has said that Tehran will not listen to Tel Aviv’s threats and will keep its forces and weapons in Syria, Iranian Students’ News Agency (ISNA) reported.

“The Islamic Republic of Iran will keep its military advisors, revolutionary forces and its weapons in Syria”, he said.

Jafari has cautioned Israel against making any further threats, warning that it “was playing with the lion’s tail” and promising that otherwise Iranian missiles will “roar and fall on [its] head”.

Jafari’s statement comes in the wake of threats made by Israeli Prime Minister Benjamin Netanyahu on 15 January during an appointment ceremony for the new IDF Chief of Staff. The Israeli PM specifically warned that IDF forces will continue conducting airstrikes in Syria targeting the Iranian troops allegedly stationed there. In light of this threat, Netanyahu urged Tehran to “get out of there fast”.

Israel has been conducting air raids on Syrian territory over the last few years, claiming to be targeting Iranian and Hezbollah forces and warehouses. The latest strike on 12 January, which targeted the Syrian capital’s suburbs, damaged Damascus International Airport service buildings and several planes. Netanyahu stated on the next day that the Israeli Air Force had targeted alleged Iranian and Hezbollah weapons depots in Syria.

Israel previously admitted to having conducted airstrikes in Syria, stating that it was targeting Iranian military facilities, allegedly located in the Arab Republic. Tehran and Damascus have condemned the Israeli air strikes on the Arab Republic on multiple occasions, calling for the international community and the UN to stop further air raids.
—

On 3rd of January a news spread in social media regarding Qasem Soleimani and AbuMahdi Mohandes who has died by a US drone strike near Baghdad Airport and this was the end of their lives. In social media, especially Iranian users, there was a chaotic situation, some called of “the general of... END_OF_DOCUMENT_TOKEN_TO_BE_REPLACED