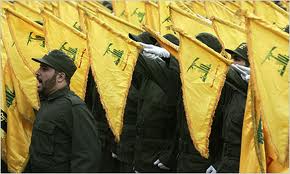 The allegation, made on Lebanon’s Future Television, echoes similar comments by

The former Hezbollah secretary said that at least 138 militiamen had died in Syria and scores had been wounded. The organization is split over its involvement, he said.

Lebanese Sunni Muslim clerics called on April 23 for a holy war to defend co-religionists in Syria from Hezbollah, amid concern that Lebanon is being sucked into its neighbor’s increasingly sectarian conflict. Lebanon’s President Michel Suleiman dismissed the calls. The uprising against Assad began with peaceful protests in March 2011 that turned violent when the government forces turned their guns on demonstrators.

“Hezbollah fighters have crossed the border and started to kill our people to support the murderer Bashar al-Assad,” Sabra said at a televised press conference. The group is “occupying Syrian villages, murdering civilians, preventing them from peacefully expressing their views.”

The Syrian government says the unrest is distinct from the so-called Arab Spring uprisings that have toppled the leaders of Tunisia, Egypt, Libya and Yemen. It says it’s fighting an Islamist insurgency, citing as evidence the recent merger of al- Qaeda in Iraq and the al-Nusra Front in Syria.

Hezbollah has denied it is backing Assad in the fighting, saying it’s helping Lebanese Shiites living in Syrian border towns and villages to defend themselves against rebel assaults. It has remained largely silent amid a wave of recent accusations by Syrian opposition leaders and Lebanese groups about its involvement in Syria.

“Hezbollah has not denied the claims and does not appear very concerned about how its involvement will be interpreted,” said Paul Salem, director of the Carnegie Endowment for International Peace’s Middle East Center in Beirut.

After the protests evolved into armed conflict and the al- Nusra Front’s involvement was highlighted, both Iran and Hezbollah had a “convenient excuse — that they are fighting against militant jihadis and not an Arab Spring uprising,” he said.

They may have concluded that “Assad is not about to fall and that they’re not on the Titanic but on the side that’s going to be around for a long time,” he said.

The group is considered a terrorist organization by the U.S., U.K. and Israel.

Syria’s conflict is rapidly deteriorating and is threatening the stability of its neighbors, particularly Lebanon, Susan Rice, the U.S. ambassador to the United Nations, told the Security Council yesterday.

“Hezbollah not only continues to undermine Lebanon from within by violating the government’s policy of disassociation, but actively enables Assad to wage war on the Syrian people by providing money, weapons, and expertise to the regime in close coordination with Iran,” she said.

In a letter to Hezbollah chief Hassan Nasrallah from Moaz al-Khatib, former SNC leader, he said: “Is it satisfying to you that the Syrian regime shells it citizens with fighter planes and Scud missiles?

‘‘I demand that you withdraw all Hezbollah troops from Syria,’’ al-Khatib said.

U.S. Treasury to brief UAE and Israel on Iran pressure

Is the Arrest of Ahmadinejad Imminent?

Couple who are political prisoners prevented from meeting

Group rapes in Karaj prison under orders of prison officials