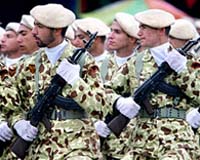 “Loose lips sink ships” was a popular slogan during World War II, a reminder that misplaced words could help the enemy. But the reverse is also true: Purposely placed words can sink the enemy’s ships. At a time when President George W. Bush keeps reminding Iran that “all options are on the table,” a group opposed to the regime reveals new information on the Islamic republic’s involvement in Iraq.

According to an Iranian opposition group, Iran’s al-Quds force is heavily involved in training Iraqi death squads and militias. The latest reports from the Mojahedin-e-Khalq, or the MeK, accuse the Iranian regime of secretly engaging in “the organization and training of large Iraqi terrorist networks in Iran and sending them back to Iraq”.

The group opposed to the ruling clergy in Tehran says Iran’s ultimate goal is to destabilize Iraq, forcing U.S. troops to leave the country, thus paving the way for the establishment of an Islamic republic in Iraq.

Alireza Jafarzadeh, an Iranian opposed to the current regime in Tehran, divulged in New York Tuesday information he received from sources inside Iran — mainly from the MeK — with whom he enjoys close ties.

The MeK, which is lobbying hard to get off Washington’s list of terrorist organizations, recently released a list of nearly 32,000 Iraqis on Tehran’s payroll. Those included senior officials in the Iraqi government.

The Quds Force of the Islamic Revolutionary Guards Corps has allocated several of its bases in the cities of Tehran, Karaj, Qom, Isfahan, as well as provinces close to Iraqi borders, such as Kermanshah, Ilam, Kurdistan and Khuzestan — using veteran commanders — to train death squads and terrorist networks, according to the Iranian dissident.

These individuals travel to Iran in different groups, under different covers and using various legal and illegal borders, and go back to Iraq after completing their training sessions. According to information obtained by the MeK, since February 2006 Iraqi militias affiliated with the Quds Force, such as the Supreme Council for the Islamic Revolution in Iraq — SCIRI — the Badr Corps, Hezbollah, Islamic Revolution Mujahedin, and Seyyed-ol-Shohada Movement have traveled to Iran in groups and are being trained in various camps of the Quds Force.

The trainings includes urban guerilla warfare, instruction on use of light and semi-heavy weapons, mortars, missiles, sniping techniques, use of explosives and firing shoulder-launched anti-aircraft missiles.

Still, according to Jafarzadeh, the Iraqi militias are trained under the command of IRGC Brig. Gen. Mohammad Shahlaei, a veteran commander of the Quds Force in the Ramezan base. Based on information he received from the MeK in Iran, the Islamic Revolutionary Guard Corps operates a number of secret bases where Iraqi terrorists are trained.

Among them are the Imam Ali Base in northern Tehran’s Alborz-kooh Street, north of Saad-abad Palace; south of this base is another IRGC base called “Al-Zahra.” It is designed to train women. According to the MeK, “there are many veteran instructors in Imam Ali base, with extensive experience in terrorist activities. The base is under the command of a Revolutionary Guard officer named Hossein Lotfi.”

Trainees are divided into small groups of eight. Each group has two trainers, an Iranian and a Lebanese member of Hezbollah. The training lasts 20 days. The personnel are instructed not to speak to anyone about training Arabs.

Several groups from SCIRI traveled from Sadr City near Baghdad to train in October 2006, according to Jafarzadeh. This base has been the IRGC’s main location for training foreign terrorists. In the past, the Imam Ali base was used to train terrorists; it is now reserved exclusively to train Iraqi militias.

Hezbollah Base in Jalilabad, Varamin has been used by al-Quds Force to prepare Iraqi volunteers where an al-Quds Force commander named “Fouad” is the liaison officer. Two of the foreign trainers are named “Khalili” and “Vajih.” They are Iraqis who lived in Iran for years and are employed by the Quds Force. On Jan. 2 a group of 50 Iraqis from Sadr City completed their training and returned to Iraq.

According to the MeK, Abu Ahmad al-Ramisi, a former commander of the Badr Corps, has infiltrated the Iraqi government. He also goes by the Iranian name of Muhammad Ali Hessani. Employed by the IRGC since 1986, he was dispatched in April 2003 to Iraq, where he became commander of the Badr forces in Al-Muthanna Province. He is presently the governor of Al-Muthanna Province.

The list goes on: Bahonar Base in Karaj is another site for training Iraqi militias. Iraqi militias are sent to this base in groups of 50 from Tehran. Their training lasts 30 days. Several groups have been trained in this camp since October 2006.

Bahonar Base is one of the most important training bases for foreign fighters. The operations and information about the trainees are strictly confidential. The trainings are organized in a way that the trainees have the least possible information about each other. In this base the principles of urban guerilla warfare, deception and coverup, methods and tactics for collecting intelligence, various weapons training, body-building and working with explosives are taught.

The MeK network inside Iran has proven accurate in the past, exposing Iran’s clandestine nuclear weapons program by revealing the nuclear sites in Natanz and Arak in 2002.

It is still worth remembering the reverse logic of the famous WWII slogan. In other words, proceed with care. Those rooting for a U.S.-Iranian military confrontation may end up sinking both ships.

A bloody, all-out clash is inevitable no matter when the United States pulls out, he said.

It is that belief that underpins the Democratic “redeployment” plan included in the 2007 war supplemental bill now under consideration by the House of Representatives.

“I’m convinced that should there be a redeployment now, six months from now, two years from now, the sectarian violence will increase … It’s inevitable,” Skelton said.

“At what point if ever do the Sunnis and Shiites get tired of fighting each other? Obviously we’re not close to it now and I think it will be years and years before it reaches (that point). I don’t think any of these groups … who are killing each other every day are even close to being tired.”

The Democratic redeployment plan calls for the withdrawal of many U.S. troops from Iraq – either to perches nearby or back to their home bases, by March 2008 regardless of conditions on the ground in Iraq. The plan calls for leaving behind counter-terrorism forces to take on al-Qaida in Iraq and other terrorist groups, and advisers for the Iraqi military and police.

Skelton acknowledged that all-out sectarian violence would destabilize Iraq’s government and said the answer is not more U.S. troops or a continued large presence but mobilizing regional powers to prevent the spread of violence to the wider region.

“We do our very best to get other countries involved in stabilizing the region. That’s been a major problem since day one, but they are gonna have to step up to it. Whether it be Saudi Arabia, or Syria or Iran, which is doing its best to have tentacles all over the place.”

Skelton said serious mistakes were made in the beginning of the war that cannot be undone. He said the first was in failing to have hundreds of thousands of troops to maintain order after the invasion; allowing looting and lawlessness immediately after the fall of Baghdad; not securing weapons caches; shutting down government industries and putting those employees out of work; outlawing the Baath party and forbidding its members to work for the new Iraqi government and disbanding the military.

“All of this caused in some respects people to go over to the insurgency, or at least not to want to work with the Americans or coalition forces. I think it put us in such a bad shape that the best we can do is bring the violence down, get the baton handed fully to the Iraqi government and military and redeploy our troops,” he said. “We have made irretrievable strategic mistakes made that can not be unrung.”

“I don’t see a solid hoped-for democracy as we would see it coming out of here with peace spreading all over Iraq because in the most part those (are) irretrievable strategic mistakes,” he said.

Though he voted for the war, Skelton comes by his criticism of its prosecution honestly. In September 2002 and again in March 2003, just before the war began, Skelton sent letters cautioning President George W. Bush about planning for the post-war properly.

“I have no doubt that our military would decisively defeat Iraq’s forces and remove Saddam. But like the proverbial dog chasing the car down the road we must consider what we would do after we caught it,” he wrote.

He warned of the “extreme difficulty” of occupying Iraq, its ethnic and sectarian tensions, the question of what to do with Baath party members, and the possibility that the new Iraqi regime would be resisted by the population. He also warned of the possibility that an invasion of Iraq would undermine international support for the broader war on terrorism. He warned that the war might push away Iran, which had been cooperating with U.S. efforts in Afghanistan, and inflame Islamic terrorism. All of those problems have been manifested in Iraq.

“Can you unring those bells? I don’t think you can unring those bells short of starting all over again and putting hundreds of thousands of troops (into Iraq that) we don’t have. It’s far too late for it,” Skelton said. “If we had not made those mistakes — they are not small mistakes. Mistakes are always made in war but these were biggies. If they had not been made there may be some light at end of tunnel.”