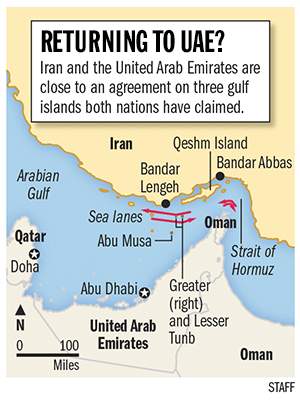 Iran and the United Arab Emirates (UAE) are close to reaching a deal on returning three Iranian-occupied islands in the Arabian Gulf to the UAE. 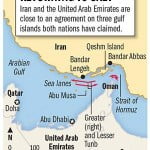 Sources close to the negotiations have stated that a deal for the return of the strategic islands to the UAE was laid out during the recent visit of UAE Foreign Minister Sheikh Abdullah bin Zayed al Nahyan to Tehran, and a response was presented during last week’s return visit by his Iranian counterpart, Mohammed Javad Zarif.

Theodore Karasik, director of research and development at the Institute for Near East and Gulf Military Analysis, confirmed that the two countries are on the verge of a breakthrough.

“Sheikh Abdullah’s visit to Tehran focused on the islands issue, and the Iranian side reacted positively,” he said. “Iranian Foreign Minister Zarif quickly came to Abu Dhabi to meet with President Sheikh Khalifa bin Zayed Al Nahyan and meet with other senior leaders to further cement a workable agreement for the transfer of the islands to the UAE while Iran retains the seabed rights.”

The strategically located islands of Abu Musa and the Greater and Lesser Tunbs are close to the Strait of Hormuz, the world’s most important oil chokepoint. The islands were occupied by Iran’s Shah Mohammad Reza Pehlavi less than 48 hours before the declaration in 1971 of the establishment of the United Arab Emirates.

The largest of the three Islands, Abu Musa, had been under the administration of the emirate of Sharjah, while the Greater and Lesser Tunbs belonged to the emirate of Ras al Khaimah, according to official UAE records.

Last year, the Iranian Revolutionary Guard Command (IRGC) inaugurated a naval base on Abu Musa. Karasik said the naval base housed hundreds of short-range missiles “for Tehran’s security purposes over the Strait of Hormuz.”

During Zayed’s visit to Tehran, the first breakthrough was Iran’s acceptance to start discussions on Abu Musa. However, Zarif was quick to reiterate Iran’s sovereignty over them, and said in a press statement released on state news agency Fars that Tehran is ready to hold talks with the UAE only to remove possible misunderstandings over one of these islands.

“We are ready for talks with the UAE on the misunderstandings [on the implementation of the 1971 Memorandum of Understanding] on Abu Musa,” Zarif wrote on his Facebook page on Dec. 3.

“The situation is a win-win because the Islamic Republic wants to put aside this contentious issue while the UAE can claim its historical rights to the islands,” Karasik said.

In addition to the strategic benefits, a deal could mean large economic benefits for both countries, he added, “given Dubai’s economic linkages with Iran, and the fact that they both stand to benefit from the lifting of the sanctions.”

Before sanctions were imposed in 2007, trade between the UAE and Iran focused on consumer goods, foodstuffs and livestock. The estimated value of annual trade was between 36.7 billion dirhams and 44.1 billion dirhams (US $10 billion to $12 billion), said the Iranian Business Council.

After the 2007 sanctions, the value of direct exports from Dubai to Iran, according to the city’s Department of Economic Development, was 1.8 billion dirhams.

US Secretary of State John Kerry acknowledged the financial strain that the sanctions have brought to gulf countries during his recent visit to Abu Dhabi, noting that after the introduction of tougher sanctions in 2012, trade has dropped to a record low of $4 billion.

“I know that many nations, especially the United Arab Emirates, have suffered from the Iranian sanctions,” Kerry said. “Just today, I have learned that trade with Iran has dropped from $23 billion to just $4 billion. That’s a huge sacrifice.

“We have real partners in the UAE, and this affects them,” he said. “This is something that Congress and others need to take note of as we think about where we are going in the future.”

Abdel Khaleq Abdullah, a United Arab Emirates University political science professor, said if a deal on the islands emerges, it will be a watershed in gulf-Iranian relations.

“This has been a 40-plus years dispute between Iran and the UAE, and any solution to this dispute is a good solution as long as both parties agree to it,” he said. “Putting an end to this dispute is not only a huge step for the UAE and Iran, but it also proves a major improvement in relations between Iran and the [Gulf Cooperation Council] leading to the lessening of tensions in the gulf. If it’s true, it is a cause for celebration.”

Abdullah said talks have been on and off during the past 40 years.

Taufiq Rahim, a strategy adviser and political analyst based here, agreed that something is in the works.

“Definitely, there are negotiations ongoing, and the UAE is the first country Iran wants to make overtures to,” he said. “The best way to do that is reaching an agreement on the islands.”

Rahim added that when Khalifa visits Iran, he expects an announcement to be made.