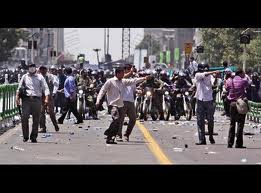 Iran`s Islamic regime is using ‘child soldiers’ to suppress anti-government demonstrations, a tactic that could breach international law forbidding the use of underage combatants, human rights activists have told the Observer. The International Campaign for Human Rights in Iran says troops aged between 14 and 16 have been armed with batons. clubs and air guns and ordered to attack demonstrators who have tried to gather in Tehran. The youths – apparently recruited from rural areas – are being deployed in regular riot police roles and comprise up to one-third of the total force, according to witnesses. One middle-aged woman, who said she was attacked by the youths, reported that some were as young as 12 and were possibly prepubescent. They had rural accents, which indicated they had been brought in from villages far from Tehran, she said. Some told her they had been attracted by the promise of chelo kebab dinners, one of Iran`s national dishes. ‘It`s really a violation of international law. It`s no different than child soldiers, which is the custom in many zones of conflict,’ said Hadi Ghaemi, the campaign`s executive director. ‘They are being recruited into being part of the conflict and armed for it’. The UN convention on the rights of the child requires states to take ‘all feasible measures to ensure that persons who have not attained the age of 15 years do not take a direct part in hostilities.’.. Protesters who gathered on 1 March and a week later were met by a blanket security presence, which activists say refined the tactics used to crush the post-election revolt, when smaller detachments of youths were used informally by the hardline Basij militia. Last Tuesday youthful riot squads formed along Valiasr Street, Tehrans central thoroughfare, and forced pedestrians to run an intimidating gauntlet. Protesters chanting anti-government slogans were attacked. Multiple arrests were reported. ‘They are very keen to display violence. Teenage boys are notorious for that,’ said Ghaemi. ‘They are being used to ensure there is a good ratio of government forces to protesters and because the average policeman in Tehran could have some kind of family connection to the people they have to beat up. It`s a classic tactic to bring people from outside, because they have no sense of sympathy for city dwellers’. (The Observer)