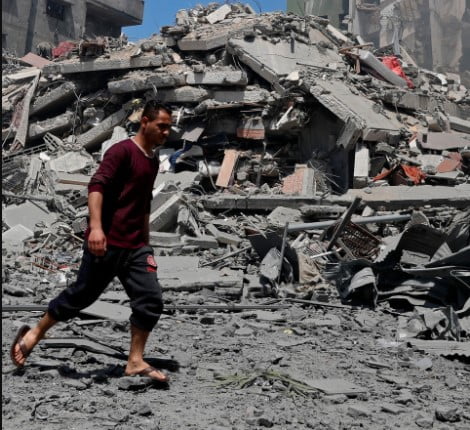 Airstrikes continued Monday night into Tuesday in Palestine and Israel, as President Joe Biden expressed support for a ceasefire in a phone call with Israeli Prime Minister Benjamin Netanyahu.

“The cause of it, in effect, is internal Palestinian power struggles,” said retired British Colonel Richard Kemp to The National Desk’s Jan Jeffcoat. “It involves more than just Israel and Hamas, it involves also Israeli clashes with Palestinians inside Israel itself, and in the West Bank, and also attempted rocket attacks being launched from Lebanon and Syria into Israel, as well as the massive bombardment from Gaza.”

“Canceling them because he knew he was going to lose, and then blaming Israel,” said Col. Kemp. “That, in turn, helped to fuel riots in Jerusalem, which were perpetrated by Palestinians.”

According to Col. Kemp, Hamas “saw itself as a defender of Jerusalem, and launched the rocket strikes,” with help from Iran.

Col. Kemp says that by influencing unrest in the Middle East, it will give them extra leverage in nuclear deal talks being negotiated between the Europeans and Iran on behalf of the Americans. Israel has been targeting tunnels and other military infrastructure as part of its strategy.

“I think Israel has done immense damage to the tunnels under Gaza, there are dozens of kilometers of tunnels dug since the 2014 conflict to house fighters, to house munitions, to house command facilities,” said Col. Kemp. “In one strike, they deployed 160 airplanes firing bunker buster bombs at these tunnels and caught many Hamas fighters in those tunnels and destroyed many munitions as well.”

Also Read: Is Iran Behind The Outbreak Of Israeli-Palestinian Violence?