While the world watched North Korea’s latest nuclear test — five times more powerful than the bomb on Nagasaki — one country was standing beside the renegade regime, as it always has. 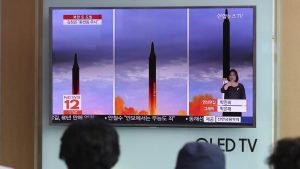 Iran’s missiles are modelled on North Korea’s, and intelligence reports indicate that the two worked together on developing a miniaturised nuclear implosion device. According to a 2010 cable released by WikiLeaks, Iran obtained 19 advanced ballistic missiles from North Korea.

Meanwhile, a report in Britain’s The Telegraph states that the British Foreign Office is investigating whether Iran helped with the recent advances to mount nuclear warheads on missiles. Iran now has increased funds to do so because of the lifting of sanctions under the Obama administration’s nuclear deal. This means that as North Korea assists Iran with its missile and nuclear technologies, Iran can offer North Korea a rare source of hard currency.

In some ways the two countries’ nuclear programs mirror each other. Both have devoted substantial resources to nuclear technologies and both have proceeded in the face of international sanctions.

But the two programs are not the same. North Korea’s program is an immediate threat. Kim’s regime has upped its bellicose rhetoric and been increasingly provocative.

However, North Korea’s nuclear policy is fundamentally a defensive deterrent. The same cannot be said of Iran, which increasingly is seeking to establish itself as the dominant power in the Middle East, well beyond its borders. Iran’s Hezbollah proxies are active in Lebanon and Iran maintains de facto control of parts of Iraq, Syria and Yemen.

As the civil war in Syria winds down, Iran wants a permanent military presence there. According to the Iranian armed forces chief of staff, it also may establish naval bases there and in Yemen. Elsewhere, Iran has threatened Saudi Arabia and Israel and actively aids the Shi’ite insurrection in Yemen.

For Iran, nuclear technologies are part of its strategy for greater regional influence. Just one month ago, Iran’s parliament overwhelmingly voted to spend a further $260 million on its ballistic missile program and about $300m on activities by the Quds Brigade, the international arm of the Revolutionary Guards.

Iran has learned from Kim about getting away with constructing a nuclear program as well as assistance with the technology. Most recently, Iran has insisted that its military sites are off limits to nuclear inspectors. It was North Korea’s refusal to allow the International Atomic Energy Agency access to military sites in the mid-1990s that triggered an 18-month nuclear crisis.

If there is one lesson from North Korea, it is that failure to act now to halt Tehran’s progress will have serious repercussions later.

Iran’s hegemonic ambitions and destructive activities already extend well beyond its borders. Adding nuclear weapons to the mix will set up a dangerous future for what is already the world’s most fragile and unstable region.