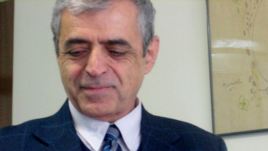 TEHRAN – Iranian pro-democracy activist Kourosh Zaim has been handed a three-year suspended sentence after judges found him guilty of acting against national security and spreading propaganda against the Islamic republic.

The 72-year-old member of the opposition National Front has been a vocal critic of the regime in Tehran.

Zaim was arrested in February 2011, hours after an interview with RFE/RL’s Radio Farda was broadcast.

In the interview, he said authoritarian regimes in the region would inevitably face “social explosions,” especially due to the fact that the majority of the populations there are young people who have access to information through social media.

It’s not clear, however, whether Zaim’s arrest was connected to the interview.