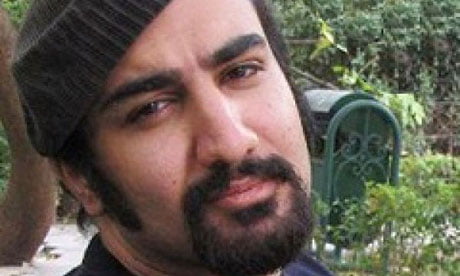 Iranian officials have so far refused to acknowledge they are holding Kouhyar Goudarzi, whose mother was also arrested

Human rights groups have expressed concern over the fate of Kouhyar Goudarzi, a prominent Iranian activist who was arrested last month by plainclothes security forces.

Goudarzi, 25, an active member of the Committee for Human Rights Reporters (CHRR) in Iran, was picked up from a friend’s house in Tehran on 31 July, but authorities have so far refused to acknowledge they are holding him.

Neighbours said Goudarzi was taken away with two of his friends by people believed to be from Iran’s ministry of intelligence. His whereabouts are unknown but speculation is rife that he has been taken to Evin prison.

A day after Gourdarzi’s arrest his mother, Parvin Mokhtareh, was detained in the southern city of Kerman. She has been accused of insulting the supreme leader, propaganda against the regime and acting against the national security. Amnesty said the charges stemmed from an “interview she gave when her son was imprisoned in 2010 in relation to his peaceful human rights activities”.

Goudarzi’s lawyer, Mina Jafari told the opposition website Roozonline: “We are very worried for Kouhyar’s physical and mental health. Our only source of information about Kouhyar was through his mother, who herself got arrested … Now, we have no information about Kouhar, nor his mother. Whatever happens to him, those who arrested him should be held responsible.”

Amnesty called for Iran to allow Goudarzi to have access to his lawyer and family. “Kouhyar Goudarzi’s arrest is cause enough for concern, let alone his effective ‘disappearance’. He has been denied contact with the outside world and this puts him at real risk of torture or ill-treatment,” said Amnesty’s UK media director Mike Blakemore.

“The Iranian authorities should immediately reveal where Kouhyar Goudarzi is being held and allow his family and lawyer to visit him. If he is being held solely because of his peaceful human rights activities then we would consider him a prisoner of conscience who should be released immediately and unconditionally.”

Goudarzi was previously arrested in the aftermath of Iran’s disputed presidential elections in 2009. He was initially accused of moharebeh(waging war against God), which carries a death sentence, but was convicted of “spreading propaganda against the regime” and sentenced to a year in prison. While there, Goudarzi won the National Press Club award for his human rights activities. He was released from prison in December last year.