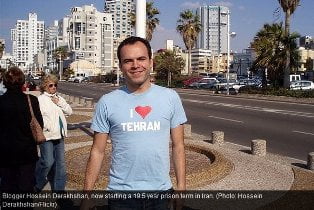 Hossein Derakhshan had hoped to return Iran safely, but hardliners arrested him and made him centrepiece of “coup plot” case.

The long jail sentence handed down to well-known Iranian blogger Hossein Derakhshan exemplifies the sometimes baffling way in which decision-making takes place in Iran. While he had certainly expressed dissident views in the past, Derakhshan had tempered his criticism more recently and had agreed with officials that he could safely return to live in Iran, where he planned to work for a state television channel.

The return to the fold of the man once known as Iran’s “blogfather” might have offered the regime a rare propaganda coup. Yet he was arrested soon after his return in 2008, and held for almost two years. In September this year, he was sentenced to 19 years and six months plus a hefty fine for colluding with “hostile governments”, anti-regime and counterrevolutionary propaganda, offending Islamic sensibilities and running “obscene” websites.

Rumours had even circulated that he would receive the death penalty.

Derakhshan emigrated to Canada in 2000 and took out dual citizenship. His blog posts, which served as an inspiration to many young Iranian web users, were supportive of the reform movement and raised taboo religious, political and even sexual issues.

When Mahmoud Ahmadinejad came to power in 2005, Derakhshan changed tack and openly backed the conservative new president, attacking the reformers and advocates of democracy and human rights.

At the same time, he courted controversy by visiting Israel in 2006 and describing the trip on his blog.

Derakhshan’s family had close ties to powerful forces in the regime. He himself wrote in his blog that Supreme Leader Ayatollah Ali Khamenei personally officiated at his first marriage, which indicates the level of access enjoyed by the family. His father is a bazaar merchant and close to traditionalist, conservative forces represented in politics by the Motalefeh party. Sources close to family members say the party still holds informal meetings at their home.

Before returning to Iran, he was interviewed times by Press TV, the Iranian government’s English language channel, during which he defended Ahmadinejad, spoke of the decline of the West and Israel, and criticised “some Iranians who call themselves dissidents and are now siding with the Israeli lobby against their own president, against their own people”.

In one of the few interviews given by a family member, Derakhshan’s mother Ozra Kiarashpour told the Kamtarin website last month that he had been planning to work for Press TV in Tehran and had cleared this with the High Council of Iranian Affairs Abroad, which promised he would not face any problems coming back to the country.

The council, a government agency which deals with Iranian expatriates, is headed by the highly influential Esfandyar Rahim Mashai, a close ally of President Ahmadinejad and currently his chief of staff.

Despite this, Derakhshan was warned by friends and critics alike that he might face problems on his return. His response was that they did not understand how the system worked.

On arriving in Iran in October 2008, he was arrested within a few days by the Intelligence Bureau of the Iranian Revolutionary Guards Corps, IRGC. He was held incommunicado and in solitary confinement for eight months, without access even to a lawyer.

His mother said that because of the guarantees he had received, “even though he knew they might call him for questioning, he was unprepared for being arrested”.

“After Hossein’s arrest, a representative from the council told us that they pursued his case on behalf of the Council but that unfortunately they couldn’t do anything further. Why are there such splits in the country’s security apparatus?”

The very fact that Derakhshan was in prison remained unclear until July 2009, the month following Ahmadinejad’s re-election as president.

In a bid to prove that the protests following the vote were a “velvet coup planned from abroad”, Tehran deputy prosecutor Mehdi Sepehri cited a confession obtained from “a spy in custody whose identity cannot be revealed for security reasons, who returned to the country to play a role in the presidential election”. There was no doubt this “spy” was Derakhshan.

As part of the indictment, the prosecutor named a number of organisations allegedly behind the plot, including Hivos, a Dutch non-governmental organisation, Harvard University’s Global Voices project and the Memri media institute, which Derakhshan had either worked for or been in contact with.

A source familiar with the case told Mianeh that Derakhshan was asked to at one point in the proceedings to give a televised confession, but refused to do so. He added that that Derakhshan told him the confession had been extracted under pressure and had no foundation.

The fact it was the IRGC that arrested Derakhshan is significant, given the central role the corps went on to play in dealing with the post-election unrest. The IRGC used him as the centrepiece of an indictment document which resulted in the jailing of leading opposition politicians and journalists.

A source close to the Derakhshan family told Mianeh that because they had high-level contacts in the Iranian establishment, the Supreme Leader sent an emissary to the IRGC Intelligence Bureau to seek a review of the case. But senior IRGC figures turned this down, saying Derakhshan’s switch to supporting Ahmadinejad after so many years criticising the regime was just a ruse.

After sentence was passed, some influential figures in the regime planned to visit the family at their home, but the IRGC intervened to foil this expression of sympathy. The family itself was told not to publicise the case or members would be arrested, and a source close to them says all their communications are being intercepted.

Because Derakhshan distanced himself from former friends and colleagues both in Iran and in the diaspora, his case has not received as much media coverage as those of other imprisoned dissidents.

His IRGC captors not only refuse to take Derakhshan’s change of heart seriously, they are unlikely to allow him to be released in case he reveals how they attempted to secure a confession from him several months in advance of the June 2009 election. That would suggest that long before any protesters took to the streets, the IRGC was concocting the “velvet coup plot” in order to crush the reform movement, journalists and human rights defenders.

Omid Memarian is a journalist and Iran expert who lives in San Francisco.