A top Iranian military figure in the country’s Islamic Revolutionary Guard Corps, or IRGC, recently outlined the rogue nation’s long-term plans to “defeat world powers,” saying that Tehran has been “chosen to wage jihad” across the globe. 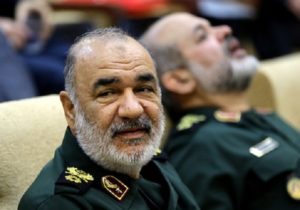 “We are planning to break America, Israel, and their partners and allies,” the IRGC leader said, referring to Iranian militants stationed across the region in places such as Syria, Lebanon, and Yemen. “Our ground forces should cleanse the planet from the filth of their existence.”

The commander disclosed that Iranian armed forces have “plans to defeat the world powers” via a combination of local and foreign terror operations meant to cripple Western nations and put them on the defense, according to Salami.

“We shall never lay down our weapons. We are holding the banner. We have taken an oath. This is who we are. We were not created for this world. We were chosen to wage jihad,” Salami said in remarks translated by the Middle East Media Research Institute, or MEMRI, a watchdog organization.

“We shall fight them on the global level, not just in one spot,” he said. “Our war is not a local war. We have plans to defeat the world powers.”

“We will break our enemy,” Salami said. “We have decided to do so. We have a plan. We are organized and motivated. We have faith. We have martyrdom. We have jihad.”

“Our nation’s sword has been drawn out of its sheath,” he continued, issuing pointed remarks to Saudi Arabia, Iran’s top regional nemesis. “Our enemies should know that we will never let them be. America, too, is distressed today. It does not have the appearance of a world power at all. America, too, has been defeated.”