TEHRAN (FNA)- Iranian Defense Minister Brigadier General Hossein Dehqan condemned the recent Israeli savage and inhuman acts against the Palestinian civilians in the Gaza Strip, and said Gazans’ resistance will end in the failure and defeat of the Zionist enemy.

“Certainly, the Palestinian people’s Intifada and their resistance against such aggressions will bring disgrace to the (Zionist) regime’s supporters and humiliating defeat for the aggressors,” Dehqan said, addressing the defense ministry personnel in Tehran on Sunday afternoon. 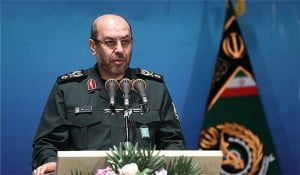 He expressed regret that certain Islamic countries have kept mum on the Zionist regime’s crimes and savage slaughtering of the Palestinian people, and said such silence has emboldened Israel to continue its aggressions.

Israel has been pounding the blockaded Gaza for seven consecutive days, killing at least 173 people and injuring more than 1,230 others.

According to the UN, 77% of the victims in Gaza are civilian and defenseless people.

Dehqan expressed confidence that Muslims would show their support for the Palestinians by participating in the International Quds Day rallies on the last Friday of the holy month of Ramadan (July 25).

The International Quds Day was started by the late Founder of the Islamic Republic, Imam Khomeini, in 1979 as a way of expressing solidarity with the Palestinians and underscoring importance of the holy Quds to Muslims.

Anti-Zionist rallies and demonstrations are held every year on the last Friday of Ramadan in Muslim and Arab countries around the world, and specially in Iran.

In a Dangerous Game of Cat and Mouse, Iran Eyes New Targets in Africa

Mir Hossein Mousavi From House Arrest: “I Am Still Green And Still Standing”

EU to expand sanctions on Iran over human rights abuses