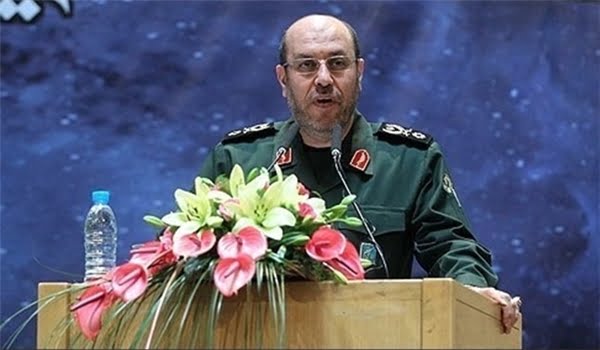 TEHRAN (FNA)- Iranian Defense Minister Brigadier General Hossein Dehqan said members of the Islamic State of Iraq and the Levant (ISIL) terrorist group and their supporters should be tried in a war tribunal.

“The terrorist grouplet of the ISIL and its supporters should be punished as war criminals,” Dehqan said, addressing a meeting with the Defense Industries Organization’s elites and managers in Tehran on Monday.

He said massacre, aggression, destruction, mass execution and displacement of thousands of people in Iraq and Syria is a clear evidence of the war crimes, which have undermined the regional security in light of the silence shown by the international community and the so-called advocates of human rights.

Dehqan underlined the necessity for maintaining national integrity and solidarity by the Iraqi people to overcome the crisis and the terrorist groups.

He also stressed the Islamic Republic’s support for the territorial integrity of Iraq, and said, “The Islamic Iran seeks an integrated, united, secure and advanced Iraq and supports any measure to this end.”

The ISIL is operating in Northern and Northwestern Iraq near the country’s borders with Turkey and Syria.

Earlier this month, Iranian President Hassan Rouhani rejected alleged reports on the deployment of Iranian troops in Iraq, but said Tehran is ready to help its Western neighbor in its war on terrorists based on the international laws if requested by Baghdad.

“We, as the Islamic Republic, are Iraq’s friend and neighbor and have good relations with the Iraqi government and nation,” Rouhani told reporters in a press conference in Tehran.