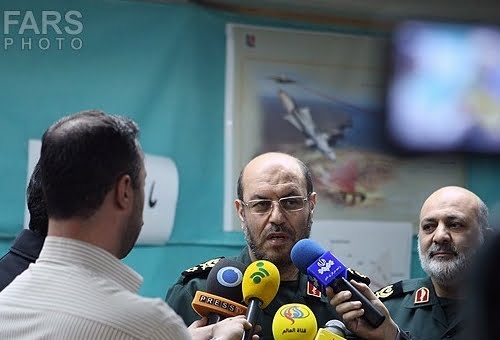 TEHRAN (FNA)- Iranian Defense Minister Brigadier General Hossein Dehqan deplored the savage aggression of Gaza by the Zionist regime, and said Israel is facing an existential crisis after its failures in the November 2012 war against Hamas.

“The Zionist regime’s aggression against Gaza again despite its unsuccessful experience and humiliating defeat in the 8-day war (November 2012) indicates the regime is existentially in crisis,” Dehqan said, addressing the defense ministry’s personnel in Tehran on Tuesday.

He said that the attacks also show the Zionist regime’s desperate and paralyzed conditions in its confrontation against the resistance front and its evil plot for destroying the resistance’s strategic power in the occupied territories.

Dehqan called on all Muslims and freedom-seeking nations across the world to defend the Palestinian nation at least by massive participation in the International Quds Day rallies to be held on Friday.

Israel triggered an 8-day fighting by assassinating the military chief of the ruling Hamas group on November 14, 2012, followed by dozens of airstrikes on Gaza.

In response, Palestinian groups fired over 1,500 missiles and rockets at Israel.

Palestinian resistance groups targeted Tel Aviv and areas near Jerusalem for the first time in the history of confrontations between the two sides, launching a rocket attack in a major escalation of hostilities as Israel pressed forward with relentless airstrikes on the Gaza Strip.

Israel called up thousands of reservists and massed troops along the border with Gaza, signaling a ground invasion of the densely populated seaside strip could be imminent.

But the attack on the Israeli settlement, along with an earlier strike on Zionists’ capital Tel Aviv, frightened the Israeli regime, making it drop its aggression plans and ask for third party mediation.

Eventually, a Cairo-mediated ceasefire agreement, which took effect on November 21, 2012, ended the Israeli attacks, which killed more than 165 Palestinians and injured about 1,269 others.

Iran Attacks ISIS in Iraq to Protect its Regional Influence

Iran will target US interests anywhere in case of war: IRGC commander