Iranian election: do the Revolutionary Guards have a candidate? 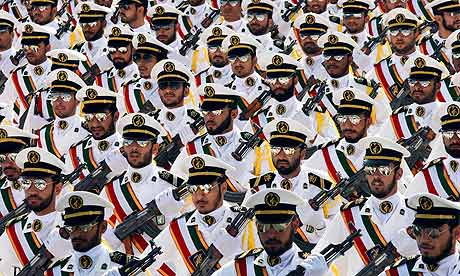 There are two frontrunners – both hardliners who favour support for Assad, repression of dissent and pressing on with Tehran’s nuclear programme.

The Revolutionary Guards Corps has enough power to block major initiatives and promote its own hardline agenda. Photograph: Reuters

While many people wonder which of the eight candidates for the Iranian presidency will appeal most to voters, the more pressing question is which will be most favoured by the ruling establishment’s power brokers, such as the powerful Revolutionary Guards.

The Islamic Revolutionary Guards Corps (IRGC) has been a dominant player in Iranian politics since the revolution. Its broad-ranging influence transcends that of an exclusively military institution. The organisation does not directly dictate policy or single-handedly choose presidents, but it has enough power within the regime to block major initiatives and promote its own hardline agenda.

Former presidential candidates such as Akbar Hashemi Rafsanjani and Mehdi Karroubi directly blamed the IRGC for influencing the results of past elections, and its weight is likely to be felt again this 14 June.

The IRGC maintains no official position in election contests. Instead, the organisation offers general guidance to its members, highlighting the personal attributes and political positions of an ideal candidate. In 2005 and 2009, the IRGC and the Basij militia it supervises used this approach to support Maxhmoud Ahmadinejad.

This year, the IRGC message has been more muddled. While we will probably gain more clarity as the election draws closer, so far there are two frontrunners for an unofficial IRGC endorsement: Mohammad Bagher Ghalibaf and Saeed Jalili. Ghalibaf and Jalili are both stalwarts of the regime, loyalists of the Supreme Leader, Ayatollah Ali Khamenei, and IRGC war veterans.

These two were also seen as the most popular candidates in a poll by the Guard-controlled Fars news agency that was reported on by other IRGC media outlets this last week.

Having commanded both the IRGC air force and the national police, Ghalibaf has a significant security résumé, and he has in effect managed Iran’s largest city, as the mayor of Tehran. In his first run for president, in 2005, he attempted to widen his base beyond hardline constituencies by appearing as a modern, tech-savvy candidate. Though this may have broadened his appeal, it also dampened the trust of establishment insiders, including many in the IRGC and Basij, who instead backed the comparatively modest Ahmadinejad.

Perhaps fearing a similar result, Ghalibaf has changed tactics this time around. He has made an effort to court the hardliners he alienated in 2005, touting his credentials as a tough, anti-reformist official. In a recent speech to a Basij audience, he took credit for harsh crackdowns on pro-democracy activists in 1999 and 2009.

His standing among IRGC commanders might also carry some weight. Murky reports have come out claiming that he has been endorsed by Ghasem Soleimani, the head of the IRGC’s covert Quds Force and an influential figure in the regime.

Saeed Jalili is a first-time candidate. In contrast to Ghalibaf, there are few questions regarding his motivations. As an ardent supporter of war veterans, and an injured veteran himself, Jalili has endeared himself to the IRGC and its Basiji base.

He is seen to have unwavering loyalty to the system and Khamenei. He has earned an endorsement from Ayatollah Mohammad Taghi Mesbah Yazdi, Iran’s most prominent extremist senior cleric, and he holds inflexible views on foreign policy and the country’s nuclear programme. His campaign slogan could hardly be more blunt: “No compromise. No submission. Only Jalili.”

In the latest issue of the IRGC weekly, Sobh-e Sadegh, the deputy representative of the Supreme Leader to the organisation, briefly describes the ideal candidate: “The president of the republic should want to truly be the servant of the people and not just [claim he is as as] a popular slogan. He should resist the enemy, not be passive and afraid.”

The organisation wants to be unchallenged in the areas it cares about, and it wants an unflinching commitment to “resistance”. Whether supporting Assad in Syria, not compromising on the nuclear programme, or repressing any pro-democratic dissent, the IRGC wants a president it can work with – and one who, above all else, won’t get in its way. Jalili may well be that guy. But don’t count Ghalibaf out just yet.

Iran Accelerates Crackdown on Media and Dissidents Prior to Election

U.S. calls for release of journalists