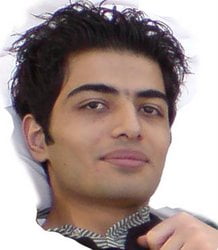 Mohammad Reza Rouhinejad said on October 18 he last saw his son three weeks ago. He said on that occasion, “Hamed was in very poor health, physically and mentally.”

Rouhinejad’s father stated that his son is losing his vision, he has no sense of touch, and the disease has affected his hearing. He also said that Hamed has developed kidney and liver problems in jail.

“My son’s disease was under control before he was arrested,” Rouhinejad said, “but it has worsened in the course of his imprisonment.”

He added that physicians at Evin prison and Imam Khomeini hospital have said that Hamed should be released from jail for at least three months for medical treatment, but neither the judge, nor the prosecutor agreed to that.

A philosophy major at Tehran’s Shahid Beheshti University, Hamed Rouhinejad was arrested in May 2009.

According to his father, Rouhinejad was initially charged with spreading propaganda against the Islamic Republic. At his trial, he was accused of membership in the Association of Iran’s Monarchy.

Rouhinejad has denied the charges. He was sentenced to death, but an appeal court commuted the sentence to 10 years’ imprisonment.

Hamed Rouhinejad was transferred from Evin prison to a prison in Zanjan, northwestern Iran, where he is being held in solitary confinement. He has been denied visits and phone calls.