This is a field report about the indifference of internet users to the Islamic republic regime’s spying efforts in cyber space as it tries to identify those who are against the regime or certain policies.The only immunity for these users comes from their overwhelming multitudes and the undeniable prevalence of opposition to the regime. Despite this immunity, they have to possess a certain civic courage and regard the freedom to use the internet as a right, while paying attention to certain security details and maintaining awareness of human predators active in various government bodies.

No one can deny that millions of Iranians rely on Facebook these days. The high number of Facebook users in Iran, which is estimated to be anywhere between four million and five million people, makes this a social phenomena. In the absence of social liberties, as young Iranians are denied the most basic freedoms even in their private lives, what these users reflect on their Facebook pages is in effect how they would like to live. 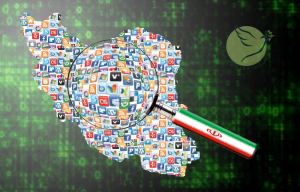 Iranians use social networking sites for, among other things, political discussion, more open posting and publication of works of art and literature, the announcement of events that cannot be publicized on domestic newspapers and to find kindred spirits or like-minded people. But is it possible for Iranians appear in any arena without Islamic Republic officials cracking down on them?

In June of 2014, three Ahwazi citizens were each sentenced to three years in jail for creating certain Facebook pages; membership on Facebook carried a one-year sentence. Some people are arrested for crimes against morality and public decency on Facebook. In July of 2014, a Revolutionary Court sentenced eight people to a total of 127 years imprisonment for being active Facebook users. In another instance, the Malayer Security chief announced the sentencing of 22 Facebook users, and this is a another long story.

All these instances raise the question of whether Iranian citizens pay attention to being under surveillance by the police and security forces in cyber space and are they effectively guarding their safety?

“The main objective of Iran’s Cyber Police is to promote cyber security through continuous observation and monitoring of cyber space,” the deputy head of Iran’s Cyber Police, Ali MirAhmadi, has been quoted as saying; “I advise all users to comply with the laws and regulations and avoid any form of offence within cyber space because the police have complete knowledge of it.”

In most cases, as soon as someone is arrested for using Facebook, the Cyber Police regard them as either a spy, prostitute, enemy abettor or guilty of crimes against morals and public decency; the offences are considered to be proven in advance.

Matin, a second-year university student, says: “Since I don’t do anything particular on Facebook, I have never paid attention. To tell you the truth, when I read the news about heavy prison terms, I don’t think that these are just average people. I don’t know why they arrest these people.”

Mahmoud is a 27-year-old hairdresser and, unlike Matin, he believes “there is no kidding around with Facebook” and explains: “Our friends had two stereo systems. They had sold their car and taken the stereo out and left the stereos at my home so that I could ask my customers if they were interested to buy them. Someone asked me, why don’t you put it on Facebook? You’ll get more buyers. I went into some groups and described the stereo and its price. The first one was sold. Then I did it for the second one. One day, they called from the Security Police to summon me. I first thought it had to do with my store and I went to the zoning office, but then they said I had to go to the security police. Oh my God! Then they really grilled me, asking why I had started a business selling stereos on the internet, and I was in and out of the court for over five months and it really affected my life and livelihood.”

Pariya believes that “under the current circumstances of our society” one should not go on Facebook with one’s own name and identity. She says: “We have so many busybodies, we should really be careful, especially girls. Security police are after those who are into politics. So those who are writing political stuff have to be really careful. One of my friends would distribute information during the election. They would write messages for them and write obscenities under these posts and even threats.”

Peyman has just finished his military service and is looking for work. He spends a lot of time on social networking sites but says: ”I’ve learned not to use my own name or photos.”

I ask what it is that he does on the internet that he needs to keep his identity concealed.

He says: “I don’t do anything. When the dollar went up, I bought some dollars (foreign currency). I would check the news each day to see how much it would go up. Then there were rumours that the price would go down. There were many comments. Eighty-six people had left comments before me. I just wrote that the price would go up and it was only a rumour that it would go down. I had not used any obscenities or bad language. One day, they called and summoned me, saying that the Cyber Police have reported that you have been creating disruptions in the foreign currency market. They gave me eight months in jail, it was reduced in the appeal court to four months. I had to serve two months and the rest they let me off for having no prior record.”

An Iranian political activist who is also very active in the virtual world says he pays close attention to his own security, adding: “I have no fear of the public. I am personally afraid of those who claim to be providing security of information for the public. I am afraid of the police. I mean those who try to cook up a file against people.”

Complainant and Expert Witnesses are One and the Same

An IT expert says the problem is that when an Iranian enters the World Wide Web, he or she must follow the model of use that suits his/her circumstances in Iran. “In our country, the internet and social networking sites are a venue for political activity. The government views this political activity as propaganda against the regime. Therefore, cyber space is under close scrutiny by the government.” The IT specialist goes on to conclude that for this reason, internet users in Iran must maintain different security criteria for themselves when they use the internet as opposed to people outside of Iran.

Many internet users in Iran are not too concerned about protecting their privacy and their personal space or taking security measures on the internet.

Some of them do not take the possibility of identity theft on the internet too seriously and some identify unfamiliarity with the English language as the reason for not exploiting potential security methods found on the web.

Most of the 80 people who were interviewed for this article did not have anti-virus software installed on their systems, and even if they did, they were often old versions and not up to date.

On 3rd of January a news spread in social media regarding Qasem Soleimani and AbuMahdi Mohandes who has died by a US drone strike near Baghdad Airport and this was the end of their lives. In social media, especially Iranian users, there was a chaotic situation, some called of “the general of... END_OF_DOCUMENT_TOKEN_TO_BE_REPLACED