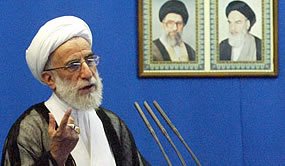 Iranian hardliner, Ayatollah Jannati told worshippers in today’s Mass Prayers in Tehran that political prisoners should not be given bail.

Iranian news agencies report that the head of Iran’s Guardian Council said in his sermon today: “Giving furloughs to prisoners is not a bad thing but not to someone who gets leave and then begins further conspiracies or flees the country.”

He added that many use these opportunities to leave the country and others who stay inside the country, begin organizing meetings and “conspiring” against the regime.

He stressed that prisoners “who were involved in the sedition against the Islamic regime and were convicted of this crime should not receive furloughs and continue with their conspiracies.”

Iranian hardliners insist that the disputes against the re-election of Mahmoud Ahmadinejad and the allegations of fraud in the 2009 presidential elections are part of a seditious plan to topple the Islamic Republic.

The opposition however insists that their protests against the irregularities in the elections are legitimate and that their demands, far from being seditious, are within the framework of the Islamic Republic constitution.

The government has however arrested scores of reformist figures and social activists which are reportedly receiving harsh treatments in prison.

Iran Creating Fiction About Postelection Unrest, Neda’s Death Anger At Actress Who Is Due To Play Role Of Neda

On 3rd of January a news spread in social media regarding Qasem Soleimani and AbuMahdi Mohandes who has died by a US drone strike near Baghdad Airport and this was the end of their lives. In social media, especially Iranian users, there was a chaotic situation, some called of “the general of... END_OF_DOCUMENT_TOKEN_TO_BE_REPLACED