In October 2018, authorities arrested Pouyan Khoshhal as he drove through the northern Iranian city of Rasht, by the Caspian Sea. The reason for the journalist’s arrest: his use of the word “death” instead of “martyrdom” to describe a Shiite saint in an article for the reformist newspaper Ebtekar. 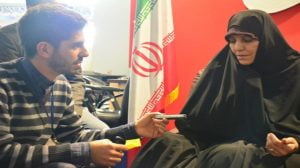 Authorities had summoned Khoshhal on several occasions over his work, including a piece about babies born to imprisoned women. But despite Ebtekar correcting the article the following day and issuing a statement announcing that it had dismissed the journalist, authorities detained Khoshhal for two months, including 10 days in solitary confinement. When he was released on bail, guards ordered him to quit journalism and move away if “[he] wanted a quiet life,” Khoshhal said.

Ultimately, he was sentenced to six years in prison, a verdict that Tehran’s Appeal Court upheld on July 9, 2019, with neither Khoshhal or his lawyer present. Fearing for his life and unwilling to serve such a harsh sentence over a single published word, Khoshhal said that he fled into exile.

Iran’s repressive treatment of journalists has led many to go into exile. Most independent journalists find the choices stifling: work for censored state-run outlets or risk being imprisoned for their work. After fleeing Iran, often having to cross borders illegally or slip away while on trips abroad—like Iranian state news agency journalist Amir Tohid Fazel, whose escape on a government trip to Sweden in August was reported by CNN—they are presented with new challenges including proving the threats against them when applying for asylum and being able to continue work as a journalist.

Khoshhal spoke with CPJ in November 2019 about his arrest and the hard decision to leave his family behind to seek safety in exile.

IRGC official threatens to destroy Tel Aviv from Lebanon The Atrocities Of IRGC Security Forces In Mahshahr, Iran…How Much Does The World Really Know?

On 3rd of January a news spread in social media regarding Qasem Soleimani and AbuMahdi Mohandes who has died by a US drone strike near Baghdad Airport and this was the end of their lives. In social media, especially Iranian users, there was a chaotic situation, some called of “the general of... END_OF_DOCUMENT_TOKEN_TO_BE_REPLACED