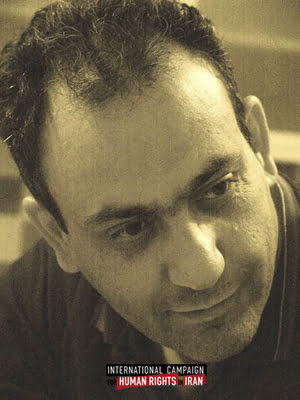 Two Iranian Kurds, including the brother of acclaimed filmmaker Bahman Ghobadi, were arrested in Sanandaj on November 3, 2012, on non-specific national security accusations. While Behrouz Ghobadi was released a few weeks later, his business partner

Rahmatollah Moadi remains at Evin Prison with no visitation rights and no official charges, his brother Nemat Moadi told the International Campaign for Human Rights in Iran.

“When Behrouz was released, he told us that [security forces] had arrested them on charges of ‘acting against national security.’ But Evin Prison officials told my family that Rahmatollah remains under interrogation, and we don’t know exactly what his charges are, so that we may hire a lawyer for him. My family have not been allowed any contact or visitation with him,” Nemat Moadi, the Kurdish prisoner’s brother, told the Campaign.

Asked what charges his brother is facing, Rahmatollah’s brother told the Campaign, “If we knew his charges, we would get him a lawyer. The truth is that when Behrouz returned to Soleimanieh, I called him and he was in a state of shock and he was crying, because Behrouz and Rahmat lived in the same building and worked together in the same shop for a whole year. He said, ‘We don’t know why they arrested us. They told us ‘acting against national security.’ They were unable to get anything out of Behrouz, but my brother has been there for 3.5 months.”

Nemat Moadi told the Campaign that his family has been unable to have any contact with his brother Rahmatollah at Evin Prison. “Before Behrouz was released, we used to think all the time that they were inside the Sanandaj Prison. Rahmat’s wife and my sisters went to the Intelligence Office, the Hall of Justice, and the Sanandaj Court several times in order to pursue his situation, but they only told them, ‘Don’t look for anything now,’ and they didn’t provide any other answers. After Behrouz’s release, when we realized that he is at Evin, my younger sister and her husband went to Evin Prison, but they were told there that because he is still in the interrogation phase, he is not allowed to have visitation or telephone calls, and when he is transferred to the General Ward, he will be allowed to make calls. They were told, ‘Don’t worry, he is here.’ That’s all,” Nemat Moadi said.

Nemat Moadi described the circumstances of Rahmatollah Moadi and Behrouz Ghobadi’s arrest. “My brother and Behrouz had a shop in Soleimanieh, Iraq. About two years ago, because my brother’s business had not taken off in Sanandaj, he went to Soleimanieh and worked odd  jobs. I own an herbal cosmetics company, Aramina, in Vancouver. Last year I went to Soleimanieh and, with the help of my brother, we established two other branches of my company in Erbil and Soleimanieh in Iraq. He managed the two branches from over there and I was here in Canada. Rahmatollah decided later to go to Georgia with Behrouz Ghobadi, so that the two of them could do business there,” Nemat Moadi told the Campaign.

“They went to Sanandaj first, because they wanted to meet with their families and then travel to Georgia. My mother is 82 and suffers from heart disease, and my sister has cancer. My brother wanted to see them before leaving. He used to go to Sanandaj once every few months, and he didn’t have any problems. After visiting with their families, they hired a car at 2 a.m. to take them to Tehran, because they needed to catch a flight to Georgia the next day at 12 noon; but they were stopped 12 kilometers outside Sanandaj and were returned to Sanandaj, where they were detained for three weeks before they were transferred to Evin Prison. But no one knew any of this until a little over a month ago when Behrouz was released and he told us,” Moadi continued.

Relating Behrouz Ghobadi’s description of the incarceration, Nemat Moadi said, “I hope nobody ends up in prison in the Islamic Republic, but if anyone ends up in prison, he will not be the same for a long time and his mouth is shut. All Behrouz says is that they were arrested on charges of ‘acting against national security.’ In the short period I was able to talk to him, he cried and told me, ‘I put my hand on the Qoran in front of the Judge [and swore] that we were both innocent and that we hadn’t done anything wrong.’” Rahmatollah Moadi remains at Evin Prison.

“Rahmat is innocent and he did not have any political activities. He was just a shopkeeper who went to Kurdistan, Iraq, because his business failed. His whole occupation was a normal life and a healthy income. I even researched with the Soleimanieh Information Office in Iraq: he had not done any negative or wrong thing. I would like to ask the Iraqi Kurdish authorities to strive for my brother’s release, because when someone dedicates himself to commerce in his land, he should be supported,” said Nemat Moadi.