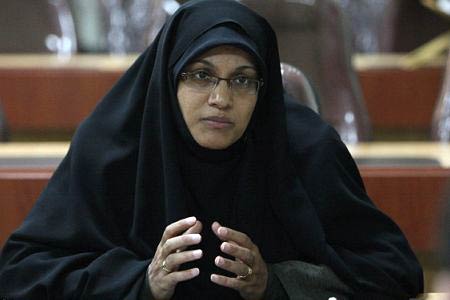 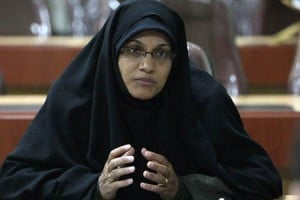 According to Mehr News Agency: Iranian MP Zohre Elahian on Wednesday called on the United Nations to take appropriate action to prevent the U.S. government from putting down the Wall Street protesters. Elahian, who is the chairperson of the Majlis Human Rights Committee, also said that the UN Human Rights Council should address the issue of the violation of U.S. protesters’ rights. “The scenes of the suppression of U.S. protesters are upsetting and necessitate pursuing human rights (violations),” she said. She went on to say that the era of U.S. claims about human rights has come to an end and the U.S. government has lost face due to the suppression of the people. In addition, she called on the international community to condemn the use of excessive violence by the U.S. police against protesters.

It is heartwarming that Elahian, an Iranian MP, steadfastly supports the Occupy Wall Street protesters from 6000 miles away! But when it comes closer to home, that is Tehran, there has been no urgency for Elahian to defend the rights of the peaceful protesters, the ones that she actually represents, at least on the paper. In fact she has gone as far as calling for the violent suppression of the Iranian opposition by the Revolutionary Guards (IRGC) (Source: Fars News Agency, July 10, 2011)! Elahian justifies her position by claiming that the opposition is after overthrowing the regime and equates them with external enemies. Let’s assume the opposition is truly after dismantling the Islamic Republic and brining a new system. Isn’t that the right of the people to do that? Elahian obviously doesn’t think so! But she and the rest of the regime’s officials are joyfully beating the drums and making lots of noise about how Occupy Wall Street movement is going to overthrow the capitalist governments of the west. But while death is good for the Iranian opposition, crying is in order for the opposition in U.S.!

Elahian has repeatedly referred to the Iranian opposition as seditionists. She has also blamed the protests by Iranians as instigated by foreigners. In November 2009, she participated in ademonstration in front of British Embassy and claimed Neda Agha Soltan’s killing during a rally in Tehran was carried out by foreigners. Elahian gave a speech at the rally (see video below) and said that Western countries are trying to create tension in Iran. She said that Neda was shot in the heart, which demonstrates that her killer was very professional. She added that an investigation by the Iranian authorities shows that “foreigners” planned Neda’s murder.

We have to give kudos to the Iranian authorities, and to Zohre Elahian, for so quickly pinpointing Neda’s murder on foreigners (every crisis is foreigners’ faults anyway!), considering she was killed during a huge rally in Tehran; even though we have to wonder why the evidence hasn’t been made public?

On the other hand, the authorities haven’t been as quick in identifying those who murdered the opposition protesters in Kahrizak, a notorious detention center under full control of the regime and a much smaller place in comparison to the capital city’s streets. But we can still give kudos to the regime for getting rid of the evidence, that is the two physicians who worked at Kahrizak and refused to stay silent about the murders. And what has Elahian done for the Kahrizak victims? She has made some noise, but certainly she hasn’t been after any serious resolution, unless she can somehow connect that to foreigners as well:

“The Kahrizak atrocities saddened many [Iranians]. However, we must not forget this incident was resolved with the guidance of the Leader of the Islamic Revolution. And it was the Leader’s direct order that led to the closure of the Kahrizak detention center,” she stressed.

So Elahian pretty much sees the Kahrizak case as closed and thanks the Supreme Leader, Ayatollah Khamenei, for resolving it, the very same person who should be held accountable for this and other atrocities in Iran. In fact it was Khamenei who explicitly threatened the opposition to stop their protests after the June 2009 elections, and when they didn’t, he turned the Basij and the Guards lose on them. So where was Zohre Elahian then to ask United Nations to protect the rights of the Iranian protesters, the ones she was supposed to represent and protect? One only has to wonder!

Considering the trampling of so many of rights of the Iranian people by the regime, and considering the fact that so many journalists, students, lawyers and activists are in prison in Iran, the Occupy Wall Street protesters will certainly not be fooled by the offer of support by the Iranian regime. And you madam Elahian better not lose focus on your highest priority, that is the violent suppression of the Iranian opposition so you can continue enjoying your precious seat in your parliament!