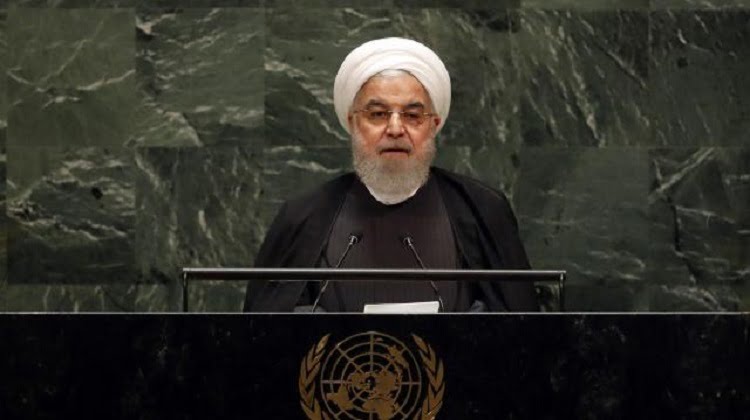 Iran’s president warned world leaders Wednesday that security in the energy-rich Persian Gulf could collapse quickly with a “single blunder,” and he accused the United States of engaging in “merciless economic terrorism” against his country.

On the same day as President Hassan Rouhani spoke, the U.S. ramped up oil-related sanctions on Iran, imposing penalties on six Chinese companies and their chief executives for continuing to transport Iranian crude.

Rouhani said in his speech to the annual U.N. General Assembly that the United States was engaging in “international piracy” against his country by re-imposing economic sanctions after Washington withdrew from the 2015 nuclear deal with world powers.

Iran “will never negotiate with an enemy that seeks to make Iran surrender with the weapon of poverty,” Rouhani said in his highly anticipated speech. “Stop the sanctions so as to open the way for the start of negotiations.”

Iranian state television broadcast Rouhani’s speech live across the country of 80 million people, many of whom are struggling under the weight of crippling U.S. sanctions that have sent the Iranian economy into freefall and limited Tehran’s ability to sell its oil abroad.

U.S. Secretary of State Mike Pompeo and the Treasury Department announced the latest sanctions, which freeze any assets the firms may have in U.S. jurisdictions and bar Americans from doing business with them,

“We’re telling China and all nations, know that we will sanction every violation of sanctionable activity,” Pompeo said at an event for United Against a Nuclear Iran, a lobby group opposed to the nuclear deal.

Tensions in the region have been increasing as the nuclear deal unravels under pressure from President Donald Trump. Iran has turned back to expanding its nuclear enrichment program after Trump’s decision last year to pull out of the accord and impose expansive sanctions on Iran despite that Tehran was in compliance with the nuclear deal.