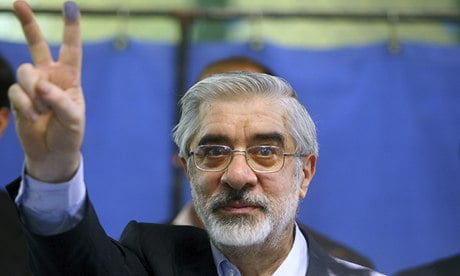 Iranian female guards struck the two daughters of reformist opposition leader Mir Hossein Mousavi and bit one of them after they visited their father under house arrest, one of the daughters said on Facebook late on Thursday. 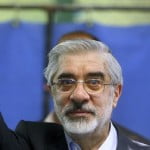 Mousavi, in his 70s and in poor health, has been held under house arrest since early 2011 when he called for marches in solidarity with Arab spring pro-democracy protests.

The election of relative moderate Hassan Rouhani as Iran‘s president in August and his expressed wish to see all political prisoners released has led to hopes that Mousavi, a former prime minister, and other reformists may soon be freed.

Nargess Mousavi said she and her sister were told they could visit their father and mother, also under house arrest, and have lunch with them on the occasion of the Shi’ite Muslim holy day of Eid al-Ghadeer on Wednesday. The visit took place at an intelligence ministry house in Tehran, next to her father’s place of arrest, in the presence of two female security agents, she said.

One of the guards attempted to search the women as they left. “We were then met with a bizarre and filthy demand by this prison guard,” she wrote on Facebook. “We couldn’t believe it at first, but she unabashedly repeated her demand, even saying she wanted us to take off our underwear. To try and describe her treatment of us defies basic human decency. After refusing to take off our underclothes, she attacked us and smacked both my sister Zahra and myself in the ear with a great deal of force.

“As I was trying to grab her hand to keep her from attacking us any further, she stopped acting like a human being and bit my entire wrist like a wild animal,” she wrote, attaching a picture of a wrist with what appeared to be teeth marks.

The Fars news agency, which is close to Iran’s elite Revolutionary Guards, quoted a source as saying Mousavi’s daughters attacked the guards in “a fully organised and intentional act to create an atmosphere for the media in order to exert pressure on security and judiciary officials”.

At least 27 people were killed and hundreds jailed in a violent state crackdown on the protests, the largest opposition demonstrations since the 1979 Islamic Revolution.

Mousavi and Karoubi have been under tight surveillance for more than two years but since Rouhani’s election their living conditions have been eased and their case referred to a powerful state security court as Iran seems keen to heal old conflicts both at home and with the West.

However, hardline conservative fears of renewed protest rallies may weigh against their release.

It is time to list Iran’s Revolutionary Guards as terrorists