Seven members of Iranian reformist parties Islamic Iran Participation Front and Mujahedin of Islamic Revolution issued a letter to the head of judiciary, Ayatollah Larijani and head of judicial branch of the armed forces, Mohammad Kazem Bahrami to press charges against a group of military and intelligence officers. 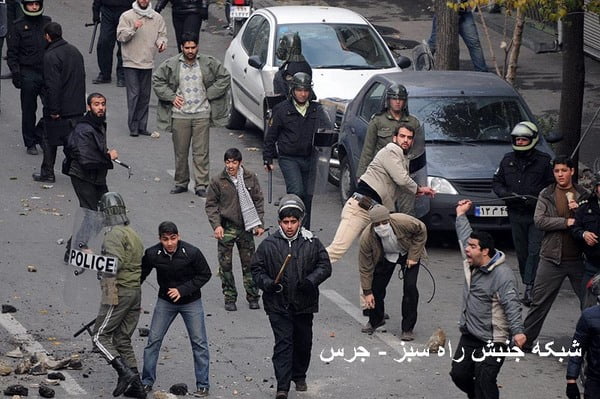 Basij militial, which is under the command of IRGC, had a key role in suppressing opposition protests after
the June 2009 presidential elections. (Photos: Basij attacking protesters in Tehran on December 27, 2009

On July 22, an audio file surfaced revealing the voice of the individual that the letter identifies as “Commander Moshfeq” talking in a security meeting and explaining methods of identifying and dealing with opposition forces in the aftermath of the controversial presidential elections of 2009.

However, in June, Javan newspaper, which is a Revolutionary Guards daily, had already published some of the statements uttered by “Commander Moshfeq” in the audio file which surfaced later.

Signatories of the letter to the head of judiciary and head of the judicial branch of the military maintain that Commander Moshfeq’s statements are “proof of illegal actions of a despotic group in the course of elections and the coup d’etat through election.” 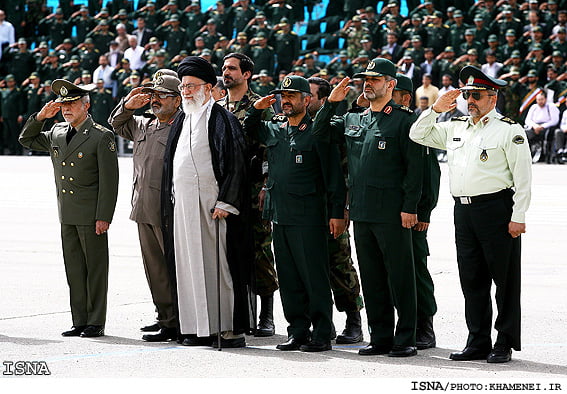 Supreme Leader Ali Khamenei with IRGC and military commanders in May 2010.
Military & IRGC commanders are appointed by Khamenei

The Sarallah Base is an Iran Revolutionary Guards Corps’ base for handling security issues of the capital and other cities of Tehran Province.

The opposition contends that the 2009 presidential election was rigged in order to secure Mahmoud Ahmadinejad’s victory.

Disputing presidential candidates, Mehdi Karroubi and Mir Hossein Mousavi have repeatedly accused the IRGC of interfering in the 2009 elections.

Iranian establishment denies the charges and accuses the opposition of fomenting sedition.

The seven members of Iran’s reformist parties claim that a military and intelligence group planned the “omission or defeat” of Mahmoud Ahmadinejad’s opponents as soon as their presence in the presidential race was approved.

Pointing to the presence of the said audio file, they add: “According to this document, the speech reveals that this group has taken its illegal actions, which are also against the late Ayatollah Khomeini’s ideals, in the name of the current leadership. The speaker in the file repeatedly attributes his statements to the Supreme Leader and justifies his statement by referring to approval of the leader.”

The letter goes on to bring nine charges of various forms of interference in the 2009 presidential elections against the commanders of Sarallah Base.

Iran Briefing Wants You! Rahim Reshi’s Son: My Father Will Continue His Hunger Strike if They Don’t Release Him

On 3rd of January a news spread in social media regarding Qasem Soleimani and AbuMahdi Mohandes who has died by a US drone strike near Baghdad Airport and this was the end of their lives. In social media, especially Iranian users, there was a chaotic situation, some called of “the general of... END_OF_DOCUMENT_TOKEN_TO_BE_REPLACED