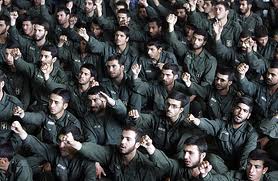 Asharq Alawsat – Baghdad, Asharq Al-Awsat- A former Iraqi security official has revealed to Asharq Al-Awsat that: “A large number of members of the Iranian Revolutionary Guard that belongs to the Qods Force are present in the fortified Green Zone, which houses Arab and Western embassies and offices and homes of government officials and some parliament members.” The source added that: “Members of the Qods Force, which is led by General Qassem Suleimani, are present in all parts of Iraq.”

The source which spoke to Asharq Al-Awsat on the condition of anonymity in a telephone interview from Bagdad said: “The Revolutionary Guard members sneaked into the Green Zone posing as bodyguards of government officials and politicians who are influential in some pro-Iran Shiite parties.”

The official, who previously held a prominent position in an important Iraqi security agency, added: “When we held a position in the security service, we warned of the dangers entailed in the Iranian Revolutionary Guard members’ infiltration of the Iraqi security agencies, particularly in the interior ministry, which has been infiltrated by members of militias belonging to some Shiite parties, and in government officials’ bodyguard teams. However, senior officials expressed reservation about this issue.”

He continued: “At the time, we asked the presidency of the council of ministers, other government officials, and the House of Representatives’ speakership and members to provide us with the names and biographies of their bodyguards and protection teams, but only a few officials provided us with general information on their bodyguards, and most of them did not do so.”

The former official revealed to Asharq Al-Awsat that: “Iraqis have been recruited into the Qods Force in Iran and sent to serve as bodyguards of officials both in and outside the Green Zone. Meanwhile, protection teams of Shiite officials were trained by the Iranian Revolutionary Guard officers in Iraq. Some of these officers resided in the council of ministers’ guesthouse in the center of the Green Zone.”

The former Iraqi security official pointed out: “The Qods Force knows the addresses of all homes and offices of Iraqi officials both in and outside the Green Zone, with the exception of Kurdish officials in Baghdad. I mean President Jalal Talabani, Deputy Prime Minister Roz Nuri Shawis, Leader of the Kurdistan Bloc in the Iraqi Parliament Fuad Masum, Foreign Minister Hoshyar Zebari, and the rest of the Kurdish officials and MPs in the Iraqi capital, as these officials appoint their protection teams from among Kurds who are close and known to them.”

He said: “It is not something strange for us to learn that the Qods Force members are spread in all parts of Iraq. The southern governorates, such as Basra, Al-Nasiriyah, and Al-Amarah, are under the control of the Revolutionary Guard, and Iranian elements can carry out any plot against the security situation. Moreover, the Qods Force enjoys extensive influence in Baghdad and the Central Euphrates governorates. They sneaked into the Iraqi Kurdistan Region cities through commercial companies that operate directly in favour of the Qods Force.”

The former security official expressed his belief that “the Qods Force was behind the crime of the Al-Nakhib incident, which claimed the lives of nearly 30 Iraqis who were on their way to visit the grave of Al-Sayyidah Zaynab last month.” He noted: “They [the Qods Force members] seek to control the road between Iraq and Syria, the responsibility for which lies with military and security forces personnel all of whom are Sunni Arabs, namely from the residents of the Al-Anbar Governorate.”

The former official cautioned: “The Qods Force seeks to establish a foothold on the Iraqi-Saudi border. They attempted to do so several times but Iraqi Arab tribes in Al-Najaf and Al-Diwaniyah prevented them from establishing a presence there.”

He said: “I will not be surprised if the Qods Force members in the Green Zone assassinate any Iraqi official or an Arab or Western diplomat if they want to.”

He warned: “The most serious danger of the presence of the Iranian Revolutionary Guard personnel in sensitive areas in Baghdad and other provinces in Iraq is that they can carry out a security coup, especially if the US forces withdraw from Iraq, and this is what Iran is pushing for.”

He noted: “Iran was involved in the formation of the Iraqi Government. It interferes in all security and economic policies in Iraq and needs no influence so long as there are people who act on its behalf.”

The former Iraqi security official said: “No one in Iraq can intervene or talk about the Iranian influence, and if someone intervenes in this issue, he will be excluded.”