“So, look at how the IRGC generates funds. The IRGC detains a spy like Jason Rezaian. The U.S. pleads for him to be released. We say: no, you have to pay for him. 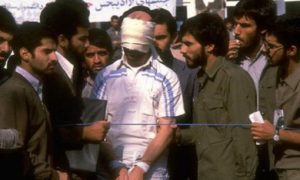 Our government gets paid $1.7 billion to hand over this spy. Thus, by detaining just one spy, the IRGC earns the equivalents of the $1-2 billion it was supposed to receive from the government budget.” (Hassan Abbasi, state-run website Asr Iran, 23 January 2020)

These were the sentences of the former IRGC commander Hassan Abbasi, who was responsible for the development of the Revolutionary Guards Navy and a member of the Central Council of IRGC’s Ammar base. A number of government media, including the Asr Iran website, cited Hassan Abbasi’s remarks on the manner in which the Iranian Revolutionary Guards were held hostage to earning money on 23 January 2020. A terrorist approach by the IRGC to threaten, blackmail and extort Western countries under the policy of appeasement of Western countries to advance the policy of exporting terrorism by the mullah’s regime.

But is this confession confined to Abbasi alone?

“… The other thing is that the Americans have to know that there is no military action against Iran. If the Americans want to have a bad eye on Iran, think of a military attack, be sure that we capture the first thousand Americans at the first week, and at that time to set them free they must pay billions of dollars, and of course, many of our economic problems may still be solved, so we recommend getting the idea out of the way. (Sabzali (Mohsen) Rezaei, former chief of the Revolutionary Guards, Iran’s state television, 13 July 2015)

The famous terrorist, Anis Nakash, one of the Lebanese mercenaries of the mullahs ‘regime and close associates of Mohsen Rezaee and Mohsen Rafiqdoust, who had spent ten years in French prisons for murder and assassination, also revealed a portion of the Revolutionary Guards’ ransom policy with the use of hostage tacking and said:

On 3rd of January a news spread in social media regarding Qasem Soleimani and AbuMahdi Mohandes who has died by a US drone strike near Baghdad Airport and this was the end of their lives. In social media, especially Iranian users, there was a chaotic situation, some called of “the general of... END_OF_DOCUMENT_TOKEN_TO_BE_REPLACED