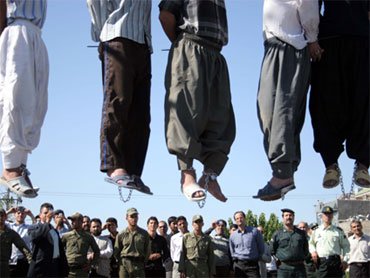 October 28, 2010
The International Campaign for Human Rights in Iran (ICHRI) says the number of unannounced executions at the Vakilabad prison in the eastern Iranian city of Mashhad has increased, RFE/RL’s Radio Farda reports.

The U.S.-based organization said in a statement on October 26 there are more than 600 inmates on death row at Mashhad.

ICHRI Executive Director Hadi Ghaemi told Radio Farda on October 26 that a large number of executions have been carried out secretly in Mashhad in recent months. He added that the executions are carried out summarily and without notifying the prisoners’ families or lawyers.

Ghaemi said that according to Iranian law, after a death sentence is confirmed by the Supreme Court the convicted person’s lawyers and family must be informed.

He added that when a court ruling is sent to the Office for the Enforcement of Sentences, the prisoner’s family should be informed of the time of the execution in order to visit the prisoner and even attend the execution.

But Ghaemi claimed such procedures are often not followed by prison officials at Mashhad’s Vakilabad prison.

“The officials only contact the family the day after the execution to tell them to come to the jail in order to pay the cost of the rope [with which the prisoner was hanged] and to receive the body,” he said.

Ghaemi added that the ICHRI has received credible reports about the secret executions from within the prison.

“One of the people who talked about the executions was Ahmad Ghabel, who was rearrested after publishing those reports,” Ghaemi said.

A religious scholar, Ghabel was first arrested in December on his way to the funeral of senior dissident cleric Ayatollah Hossein Ali Montazeri. He spent
six months in jail in Vakilabad before being released on bail, then was rearrested last month in Mashhad.

Ghabel’s wife told Radio Farda then that her husband had said one of the reasons for his detention was his statements about the executions at the prison.

Head of Iran’s Quds force warns enemies of the regime

Revolutions: Promises of Countries Yet to Come