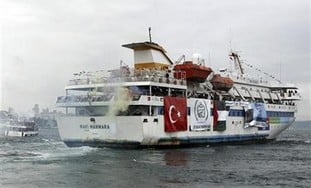 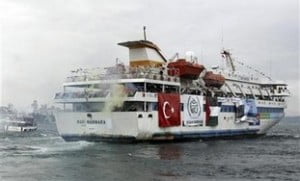 3 Iranian spies reportedly on house arrest after they forged passports in Istanbul; spies have had contact with al-Qaida, German ‘Bild’ reports.

Iran’s suspected connection to the Turkish IHH flotilla is at risk of being exposed, German daily Bild reported on Saturday, citing intelligence sources.

Following the Iranian government’s concern over the possible revelation, three Iranian spies have reportedly been placed under house arrest after they falsified passports andtravel documents in Istanbul for organizers of the IHH flotilla.

According to the Bild report, the spies’ cover names are “The Broker,” “Bit Taxim” and “Hot Chai” and they reportedly have been in contact with al-Qaida and the Iranian al-Quds Brigade.

On Friday, the IHH announced that it will not take part in a Gaza protest flotilla later this month due to repairs needed for the Mavi Marmara, prompting activists to pledge that they will reach the shores of Gaza independently.

Bulent Yildirim, head of the IHH, announced at a news conference that the vessel will not sail for Gaza because of unrepaired damage caused by the IDF raid on the ship which left nine Turkish activists dead in May 2010.

“The Mavi Marmara unfortunately suffered so much damage we couldn’t get it ready in time,” Yildirim said.

Speaking to reporters in Istanbul, he denied that Ankara had forced the organization’s hand, saying “there is absolutely no obstruction by the government.”

Following the IHH’s announcement, the Free Gaza Movement posted a message on their website in which they said: “the fact that the Mavi Marmara will not participate in the FF2 [Freedom Flotilla 2], means that the misinformation put forward by the Israeli government and its supporters that the flotilla is a “Turkish” and “Islamist” effort will be exposed.

“Hundreds of people from around the world are sailing to break the blockade on Gaza. FF2 will include more ships than the first flotilla, even without the Mavi Marmara.

Moreover, the coalition consists of significantly more member organizations this time – from all over Europe, North America, the Middle East and North Africa,” the message continued.

Earlier this month, Turkish Foreign Minister Ahmet Davutoglu was quoted in the Turkish newspaper Hurriyet as saying that “Israel should wait for a new Palestinian government to be set up and then lift the blockade on Gaza. The aid flotilla should also wait to see what happens with the Rafah border crossing being opened, and to see how Israel perceives the new government.”

Soner Cagaptay, a senior fellow and director of the Turkish Research Program at The Washington Institute for Near East Policy, said Friday night that he believes Ankara pressured the IHH to pull out of the flotilla, partly out of a desire to avoid seeing the organization designated a terrorist group.

Cagaptay added that while Turkey is a democracy, the power of Erdogan’s AKP party is such that the IHH would be hesitant to ignore their concerns.

“Their political power everyone feels – they are the longest ruling party since multi-party democracy began in Turkey,” he said. “Any Turkish organization that would cross them would feel their weight.”

Cagaptay said that with US-Turkish relations currently in a “happy phase,” they may have wanted to prevent the IHH from taking part in order to avoid souring the “vast avenue of cooperation” between the two countries.

“I think that Turkish-US policy has entered a positive phase,” he said. “The relationship with the US is kind of taking off, and there is now not only a positive area for cooperation, but it’s possible to move forward. Perhaps they’re saying in Ankara that things are sweetening up with Washington.”