Iranians around the globe gathered for demonstrations meant to show support for their compatriots suffering in Iran. 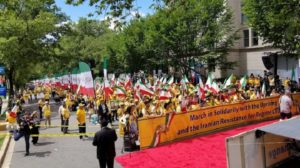 The Sunday demonstrations were held in places like Los Angeles, where thousands were said to have shown up.

Some protestors even demonstrated outside the White House, calling on President Donald Trump to be harder on Iran’s current regime.

Other demonstrations took place in cities like London, Berlin and New Zealand.

The editors of the Free Iran Herald criticized former President Barack Obama for not more strongly condemning the Tehran’s regime.

“However, in the growing chorus of international voices condemning Tehran’s regime, which includes many of the 2020 Democratic presidential candidates, one man has notably remained silent: Barack Obama. The man who saved the Khomeinist regime twice,” they wrote in a letter published at The Gateway Pundit.

President Donald Trump has arguably been much harder on Iran than Obama, though Dems are still unhappy with him. Alexandria Ocasio-Cortez slammed Trump’s threats against the country and said his hard negotiating style would bring the United States to the “brink of war.”