Protests in Iran are continuing with great intensity despite the massive crackdown on the people by the Iranian regime. 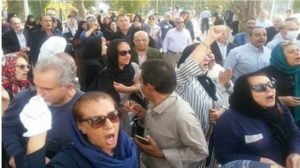 Reports from inside the country indicate that there were at least 177 protests held in Iran during the month of August. These protests took place all over the country with an average of 6 per day.

Iranians from all walks of life with many different backgrounds participated in the demonstrations and protests, including teachers, workers and pensioners.

Workers participated in more than 80 protests in 29 cities across the country last month. Many took to the streets because of unpaid wages, the dismissal of employees, the poor working conditions, the lack of job security and non-renewal of contracts, and the dismal pay scales. A number of the protests lasted several days.

Teachers across the country also held protests in a number of cities. The protests had been planned in advance and were highly organized. A number of grievances were voiced, including the very low wages teacher receive forcing them to live in poverty, the non-payment of overdue wages, the lack of permanent contracts that are awarded and so on. They also protested about the number of teachers that have been arrested in recent months.

Pensioners have also been taking to the streets, with a total of six protests in four different cities. Many of those include retired teachers, retired government employees and retired workers from a number of different companies including Tehran metro, the Nilo Tile factory in Isfahan, Fars Province Telecommunications and Isfahan Telecommunication Company.

In several cities across the country last month, defrauded creditors took to the streets calling for their stolen savings to be returned. Regime-affiliated institutions had robbed the life savings of many, causing a great deal of discontent in society.

The Iranian regime has ramped up its efforts to silence the people through violence and repression but the people are making it understood that they will no longer let the regime continue in this way. The regime has mismanaged the country for decades and the people are sinking further into poverty while regime officials continue to line their pockets.

There is no doubt that protests will continue for as long as the regime is allowed to continue with its corrupt rule that completely disregards all human rights.

On 3rd of January a news spread in social media regarding Qasem Soleimani and AbuMahdi Mohandes who has died by a US drone strike near Baghdad Airport and this was the end of their lives. In social media, especially Iranian users, there was a chaotic situation, some called of “the general of... END_OF_DOCUMENT_TOKEN_TO_BE_REPLACED