From its beginning 40 years ago this week, the Islamic Republic of Iran has enjoyed the generous benefit of the doubt from credulous observers in the West. History hasn’t been kind to their sympathy. 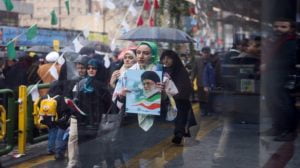 “The depiction of him as fanatical, reactionary and the bearer of crude prejudices seems certainly and happily false,” wrote Princeton’s Richard Falk of the Ayatollah Khomeini in an op-ed for The Times on Feb. 16, 1979. “Having created a new model of popular revolution based, for the most part, on nonviolent tactics, Iran may yet provide us with a desperately-needed model of humane governance for a third-world country.”

A decade later, after a reign of unbridled terror that culminated with the infamous fatwa against Salman Rushdie and the 1988 mass murder of thousands of political prisoners, including children, there was another false dawn. Several, in fact.

Ali-Akbar Hashemi-Rafsanjani, who became Iran’s president after Khomeini’s death, was viewed as a reformer. In truth he was a kleptocrat who orchestrated an international bombing and assassination campaign stretching from Buenos Aires to Berlin. Rafsanjani’s successor, Mohammad Khatami, was supposed to be a moderate. That didn’t stop the bloody crackdown on student protests in 1999 or Iran’s illicit pursuit of a nuclear weapons program during his tenure.

Mahmoud Ahmadinejad was one Iranian leader who got little international sympathy. Yet even under him Western reporters penned flattering tributes to Iran’spurported openness — right up until the moment the regime stole the 2009 election and brutally suppressed the failed, if inspiring, Green Movement that followed.

Next was Hassan Rouhani, a man the West imagined it could do business with. Business it did, in the form of the Iran nuclear deal and — until the Trump administration put an end to it — the lifting of sanctions.

Yet as goodwill flowed toward Iran, malice flowed out. In 2015 the government executed close to 1,000 people, roughly double the figure of 2010. Last month, it publicly hanged a 31-year-old man on charges of kidnapping and having sex with another man; he’s one of an estimated 5,000 gays and lesbians killed by the Islamic Republic.

On 3rd of January a news spread in social media regarding Qasem Soleimani and AbuMahdi Mohandes who has died by a US drone strike near Baghdad Airport and this was the end of their lives. In social media, especially Iranian users, there was a chaotic situation, some called of “the general of... END_OF_DOCUMENT_TOKEN_TO_BE_REPLACED