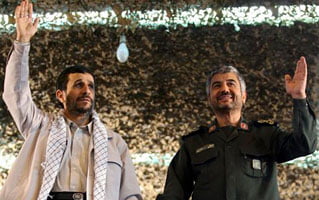 A company controlled by Iran’s Revolutionary Guards(IRGC)  has been given a contract to build a major highway, a newspaper reported on Sunday, the latest example of the elite military unit expanding its economic influence.

On Saturday, President Mahmoud Ahmadinejad marked the start of construction of the highway, which will connect two of Iran’s holy cities, calling it “the biggest project in the history of Iran and the region,” the budget for this project is estimated at between 13 to 15 billion Dollars.

The paper said Khatam al-Anbia, an engineering and construction arm of the Guards, would build the 1,100-kilometre (684 miles) road between Qom in central Iran and Mashhad in the northeast.

The Guards, a military force that has been directly targeted by international sanctions, have played a growing economic role in the Islamic Republic since hardline President Mahmoud Ahmadinejad first took office in 2005.

Iran handed the development of several phases of the giant South Pars gas field to Khatam al-Anbia worth at 21 billion dollars. But on July 19 this year, after the U.N. Security Council passed a resolution blacklisting 15 firms belonging to the Guards including Khatam al-Anbia, Iran announced that the company had pulled out of developing all phases of South Pars.

No reason was given for the pull-out.