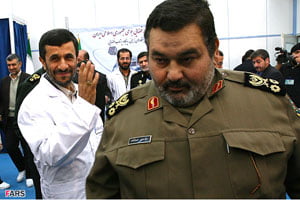 Hassan Firouzabadi, the Joint Armed Forces Chief of Staff, wants the compilation and quick approval of a law to control [political] parties since at present no such law exists.

The military officer revealed the military’s scheme to control the [political] parties and to “determine the right direction of politics through” the Ministry of the Interior, the Supreme National Security Council, and the Islamic Consultative Assembly of Iran (the Majlis). He said that all parties must continue their political activities according to the directives that they will be receiving from the Ministry of the Interior and the Supreme National Council.

Hassan Firouzabadi commented a few days after it was revealed that the Reformists won by an absolute majority in the Central Council of Parties elections. He made his comments during the ceremony introducing Mohammad Hejazi as the new commander of Joint Armed Forces Staff’s support, calling the people’s protest after the elections a “disturbance” and “rioting.” He noted that during these riots and disturbance the political scene of the country became troublesome and chaotic, and some people might wonder how political activities could go on, since one of the byproducts of the post-election riots was [the belief] that healthy political activity could not be resumed.

He added, “The country’s main bodies determined by the Constitution, i.e. Ministry of the Interior, the Supreme National Council, and the Islamic Consultative Assembly of Iran, should be engaged in this matter and announce the right political direction in a legal form.” He said that even if there is no law about controlling the parties, “That law must be compiled and sent to the Islamic Consultative Assembly of Iran (the Majlis) for quick approval.”

This military commander continued, “The parties must initiate and conduct their affairs on par with the directives and approval of the Ministry of the Interior, the Supreme National Security Council, and the laws of the Islamic Consultative Assembly Council. Also, the party members and their supporters must not worry that they might be prosecuted if they become members of any political party and as a result might not able to take care of their families or their children.”