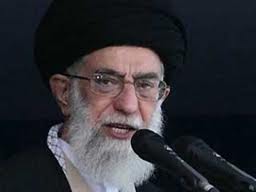 Iran’s supreme leader is supposed to be many things in the eyes of his followers: Spiritual mentor, protector of the Islamic Revolution, a moral compass above the regular fray.

Political referee is not among them.

mudslinging gets heavier ahead of elections in June to pick a successor for President Mahmoud Ahmadinejad.

“Bad, wrong, inappropriate,” scolded Khamenei on Saturday in his most stinging rebuke of Ahmadinejad for his mounting attacks on rivals — including an ambush earlier this month in parliament when he played a barely audible videotape that purported to show corruption inside the family of the chamber’s speaker.

Khamenei then went on to chide the parliament speaker, Ali Larijani, for publicly humiliating Ahmadinejad in response to the tape.

“When there is a common enemy and conspiracies are hatched from all sides, is there any way other than strengthening brotherhood and resisting the enemy?” Khamenei said in reference to widening Western sanctions and pressures over Iran’s nuclear program.

Hardball politics are nothing new in Iran, whose elected parliament and government can make even Washington’s bickering seem genteel. It also is unlikely to threaten the real power in Iran: The ruling clerics and their guardians led by the Revolutionary Guard.

But the deepening nastiness inside Iran speaks volumes about the importance of the presidential election on June 14 and how it could reset Tehran’s political order.

Khamenei seeks to tamp down the rising political spats that could signal weakness to the West in nuclear negotiations set to resume next week. He also wants to close off any openings for public complaints over the economic pain from the expanding sanctions.

At the same time, however, Khamenei risks blows to his image if his unprecedented personal intervention fails to calm the growing tremors whose epicenter is Ahmadinejad.

“The presidential election has raised the stakes in the ongoing blame game,” said Abolghasem Bayyenat, a former Iranian trade official who runs the website irandiplomacywatch.com.

Khamenei “certainly does not want the political wrangling … to get out of control,” he said.

But Ahmadinejad shows no signs of heading into a quiet retirement after his second and final term. This raises the possibility he could become something Iran has rarely seen: a political wild card able to muster allies and grass roots backers to complicate life for rivals such as Larijani.

And one of those rivals could very well be sitting in Ahmadinejad’s old office in Tehran. Khamenei has pushed back hard against Ahmadinejad’s attempts to challenge his authority in the past two years. As payback, the ruling clerics are likely to block any key Ahmadinejad backer from the presidential ballot and bring in someone who has sided with Khamenei as his relationship with Ahmadinejad drifted from cozy to cool to outright hostility.

In the meantime, Ahmadinejad heads into his final months eager to land some punches on his opponents.

“We are witnessing a new precariousness in Iran’s internal politics,” said Suzanne Maloney, an Iranian affairs expert at the Brookings Institution in Washington.

There’s no clearer evidence than Khamenei, whose hard-core followers believe is answerable only to God. Yet even he can’t seem to calm Iran’s political tempest with rare — and increasingly sharp — orders from on high.

It suggests a diminishing regard for Khamenei and the ruling clerics to fully set the political tone inside Iran — which could be the ultimate political legacy of Ahmadinejad from his defiance while in office and his possible gadfly role after leaving later this year.

Khamenei’s main worry is not whether the opposition can regroup after being hammered following the post-election unrest in 2009. Its leaders are under house arrest and activists know they would face punishing reprisals if they return to the streets.

Instead, it appears Khamenei senses that the internal political rulebook could be under threat.

Ahmadinejad first broke taboos — and earned himself instant political enemies — by challenging the authority of Khamenei in 2011 over the appointment of the powerful intelligence ministry post. Since then, Khamenei has been gradually drawn into the mix despite the traditions of the supreme leader remaining aloof from day-to-day affairs.

It seems part of Ahmadinejad’s tactics to hector Khamenei as a way to boost his status as an alternative pole of power, said Rasool Nafisi, an Iranian affairs analyst at Strayer University in Virginia.

“Ahmadinejad … seems to have adopted a strategy of pressuring Khamenei to either force him out — which would be a confession to Khamenei’s poor judgment as the main support of Ahmadinejad — or live with Ahmadinejad’s continuous assaults on his position and close associates,” Nafisi said. “Either way, Ahmadinejad will turn out a winner.”

The unraveling of their relationship began when security forces crushed the protests over Ahmadinejad’s re-election. Ahmadinejad increasingly bristled at having to take a back seat to the ruling clerics, who control all key political and policy decisions.

Dozens of Ahmadinejad’s political allies were arrested or pushed to the margins, effectively blocking his chances of having a protege on the ballot in June. Meanwhile, the political fortunes brightened for Ahmadinejad rivals, such as parliament speaker Larijani.

Earlier this month, Ahmadinejad stunned parliament with a crude videotape that purported to show a discussion over bribes that included Larijani’s brother. A week later, apparent Ahmadinejad backers hurled insults and shoes to disrupt a speech by Larijani in the seminary city of Qom.

On Friday, one of Khamenei’s close allies, Ayatollah Ahmad Khatami, used his nationally broadcast Friday sermon to urge authorities to take “strong action” in response to the incident.

“Give up these hateful disputes,” he told worshippers at Tehran University in an open reference to Ahmadinejad and Larijani. “People are tired of your fighting.”

But Ahmadinejad seems to be suiting up for a pre-election scrap. Last week, he led gatherings that were interpreted as unofficial campaign events for his top aide, Esfandiari Rahim Mashaei, in an apparent challenge to election-vetting authorities who either have to clear him or reject him.

Ahmadinejad “is a political figure who has some residual popular base, a political infrastructure, who knows where all the bodies are buried and is very eager to talk,” said Brookings analyst Maloney. “That makes Ahmadinejad the most dangerous man in the Islamic Republic.”