Could Iran's Missiles Do the Unthinkable: Sink a U.S. Navy Aircraft Carrier?

The next threat the navy has to worry about? 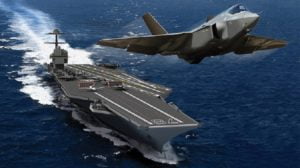 On the morning of January 20, 2019, a six-by-six Mercedes-Benz truck in al-Kiswah, Syria crewed by the Iranian Revolutionary Guard Corps began elevating a missile mounted on its back into firing position. Once the nearly nine-meter long missile attained a roughly seventy-degree angle, it solid-fuel rocket blasted it on an arcing trajectory towards Mount Hermon, twenty-miles to the west on the Israeli-controlled portion of the Golan Height.

Skiers vacationing at the ski-resort there could see the contrails of the Fateh-110 (“Conqueror”) missile streaking towards them at three times the speed of sound (video here.)

However, the missile was also detected by Israeli radars. As Israel’s David’s Sling anti-ballistic missile system was not yet operational, the IDF made do with the Iron Dome, a system designed for swatting slower, unguided artillery shells and rockets. Two Tamir interceptor missiles rocketed over snowboarders towards the Fateh missile at Mach 2, switched to electro-optical sensors for terminal guidance and destroyed it.

Israeli website Debka claims the attack was ordered by the head of the Iranian Quds force, General Qassam Suleimani, as a means to test Israeli defenses. Later that day, the IDF retaliated with an intense series of strikes in Syria detailed in this earlier article .

The domestically-developed Fateh-110 is not Iran’s longest-range missile, but it has nonetheless spearheaded a succession of missile strikes targeting Tehran’s foes since 2017.