According to global statistics, Iran occupied the sixth place in the world in terms of the most number of prisoners. Yet Iran ranks 19th globally in terms of population. Yet the situation in Iran’s prisons is unique because of the methods of torture and intimidation, especially toward political detainees. 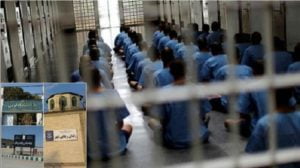 After Ebrahim Raisi was appointed Iran’s Judiciary Chief earlier this year, he completely transformed prisons into centers of torture and forced disappearances, according to sources in Iran.

A report from inside the Karaj Central Prison reveals:

The density of prisoners in the prison cells

The capacity of the halls of the central prison in Karaj is for 200 persons, but with the transfer of large numbers of prisoners to the halls, they have increased the population to 700. Due to the lack of beds in the cells, many inmates are sleeping on the ground and on cardboard boxes. Prison hygiene is very low and the environment is dirty and unhealthy.

Shortage and lack of water

Lack of hygiene is exacerbated by daily water cuts. Prison water is disconnected every day for four hours from 2-6 pm. When the prisoners protested, the prison chief responded by saying, “Go thank God that the electricity is not cut off.”

Threats and repression, consequences of prisoners’ protest in prison

Inmates who protest against the deteriorating prison situation face consequences including ostensible ‘accidents’ or ‘suicide’. While the prison chief and wardens control the prison, they repress every protest and beat the prisoners in various ways.

The forced disappearance of prisoners

Any protest that includes more than one prisoner is considered a riot. Protesters are killed very easily or severely wounded with knives. According to some witnesses, on occasions, prisoners do not return after being thrown into solitary confinement. The wardens explain that the prisoners had committed suicide.

On 3rd of January a news spread in social media regarding Qasem Soleimani and AbuMahdi Mohandes who has died by a US drone strike near Baghdad Airport and this was the end of their lives. In social media, especially Iranian users, there was a chaotic situation, some called of “the general of... END_OF_DOCUMENT_TOKEN_TO_BE_REPLACED