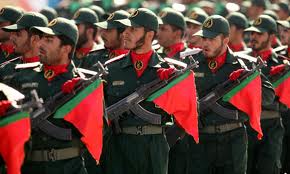 For more than 30 years the Islamic Republic in Iran has been waging a low intensity war against the United States and its allies in the Middle East. This undeclared war has claimed the lives of hundreds of Americans, including many Marines and GI’s killed by roadside explosives in Iraq and Afghanistan.

Iran’s principal arm in this war has been the Islamic Revolutionary Guard Corps (IRGC),

a paramilitary organization created in 1979 with the help of Palestinian guerrilla groups. Since then the IRGC has developed into an alternative army with its own navy, air force and special units. Charged by the late Ayatollah Khomeini with the task of “exporting” revolution, the IRGC has created a special unit, known as the Quds (Jerusalem) Division to conduct asymmetric operations against the Khomeinist regime’s enemies across the globe.

Steven O’Hern’s new book is dedicated to a study of the IRGC and the Quds Division with special focus on their operations against US forces in Iraq and Afghanistan. A retired military intelligence officer, O’Hern, is able to write this subject with some authority if only because he had personal experience of trying to the IRGC in Iraq.

The first is that the threat from the IRGC, though debatable as to its extent and effectiveness, is a fact that the outside world would ignore at its peril. Determined to de-stabilize and, when possible, help overthrow pro-West regimes, Iran’s current leaders have no qualms about using the IRGC in an increasingly aggressive manner.

Next, O’Hern asserts that the United States, the principal though by no means the only, target of the Iranian campaign is unable or unwilling to appreciate the extent of the threat. In fact, O’Hern’s book has this as subtitle: The Threat that Grows While America Sleeps.

The subtitle recalls a slim book written by President John F Kennedy about the rise of the Nazi threat while Europe slept before the Second World War.

O’Hern’s third assertion is equally interesting. He rejects the conventional wisdom’s belief that classical Shi’ite-Sunni divisions in Islam prevent the Khomeinist regime from forming alliances against their common foes.

He then proceeds to suggest that Iran has been helping Al Qaeda with training, tactics and supply of weapons for a number of years and may well have been indirectly involved in the attacks against New York and Washington on 9 September 2001.

According to O’Hern, Iran used the Lebanese branch of Hezbollah to establish a link with Al Qaeda.

He writes: “Hezbollah opened classrooms to Al Qaeda operatives who traveled to Lebanon for training. Al Qaeda purchased a guesthouse in the Bekaa Valley where its members lived while being trained by Hezbollah experts in using explosives used to bring down large structures.”

That Shi’ite Hezbollah should help train Sunni Jihadists may seem surprising. However, the IRGC itself had been partly trained by Palestinian groups that were Sunni, Christian or Marxist-Leninist. Because of their common hatred of the United States, they had little difficulty ignoring religious and/or ideological divisions.

According to O’Hern, Imad Mughniyah, a senior military commander of the Lebanese branch of Hezbollah visited Al Qaeda’s founder Osama bin Laden while the latter lived in Sudan. Mughniyah’s brother-in-law, one Mustafa Bad red-Din also played a role. A captured Al Qaeda fighter who had been in Sudan at the time witnessed the fateful meetings, O’Hern reports.

According to O’Hern, the Lebanese branches of Hezbollah, like its branches in other countries, is an integral part of the Iranian government’s military-security structure. Mughniyah was recruited by the Iranian intelligence service in 1982 and remained on its payroll until his death in Damascus more than a quarter of a century later. Lebanese Hezbollah leader Hassan Nasrallah is also an Iranian government employee and directly controlled by the IRGC.

While O’Hern hints at the ideological roots of the IRGC he does not study them in detail. Had he done so he would have paid greater attention to reasons that could bring together people from a widely different religious, ethnic and political background in a common fight against the American “Great Satan.” In fact, among the 11 men that O’Hern names as the original founders of the IRGC at least six were US-educated and at least four, including Mostafa Chamran and Ibrahim Yazdi were naturalized US citizens.

Tehran’s anti-American message has also won it a number of allies in Latin America where a number of new left-leaning regimes have helped the IRGC establish bridgeheads in what used to be Washington’s backyard. The IRGC now has “operational assets” in Venezuela, Ecuador, Nicaragua, and Bolivia, and maintains a political presence in Argentina and Venezuela and Cuba. In most cases, the IRGC has used ethnic Lebanese and Syrian groups in those countries as a cat’s paw.

As far as the US position is in this low intensity war, O’Hern’s tone remains pessimistic. However, at the end of the book he devotes a chapter to how the US could prevail. The first step in that direction, according to O’Hern, is to explain to the American public the threat that the Khomeinist regime in Tehran poses to the US. O’Hern rules out outright war against the Islamic Republic and questions the effectiveness of economic and other sanctions to change Tehran’s behavior.

What he suggests, in effect, is for the US to give Iran a taste of its own medicine, that is to say low intensity war against it. In other words, this may prove a long struggle that would not, indeed could not, end without regime change in Tehran.