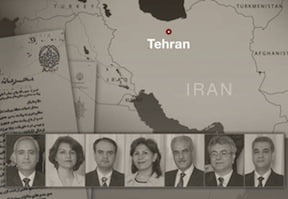 NEW YORK – Sunday 1 April marks 10,000 days that Iran’s seven former Baha’i leaders have spent in prison between them – a period throughout which they have been deprived of the rights accorded to prisoners under Iran’s own laws and regulations.

Prior to their arrests in 2008, the seven were members of an ad hoc national-level group which attended to the spiritual and social needs of Iran’s Baha’i community. They are Fariba Kamalabadi, Jamaloddin Khanjani, Afif Naeimi, Saeid Rezaie, Mahvash Sabet, Behrouz Tavakkoli, and Vahid Tizfahm. Ms. Sabet was detained on 5 March 2008. Her six colleagues were arrested in early morning raids on their homes on 14 May 2008.

Some 20 months after being held without charge in Tehran’s Evin prison, a trial began on 12 January 2010. It consisted of six brief court sessions, all devoid of due legal process. The seven were charged with, among other things, espionage, propaganda against the Islamic republic, the establishment of an illegal administration – charges that were all rejected completely and categorically by the defendants. They were each sentenced to 20-years imprisonment.

The five men are currently serving out their sentence at Gohardasht prison, some 50 kilometers west of Tehran. The two women are in Evin prison after previously being held in Gohardasht and a brief stay in appalling conditions at Qarchak prison.

On Sunday – in an initiative coordinated by human rights group United4Iran – large images of the seven will be displayed on mobile billboards and in other settings in some 12 major cities around the world.

“Those of us with the ability to speak out need to be the voices of those who have been silenced,” said Firuzeh Mahmoudi, United4Iran’s director and founder. “We hope this action will bring worldwide attention to the plight of the seven Baha’i leaders, and also remind us of all other prisoners of conscience who remain behind bars and who need our unwavering support on their behalf.”