Iran’s Summer Massacre of 1988 – 26 years ago around this time, the most horrific crime was committed by the Islamic regime in Iran and thousands of political prisoners were executed during the month of July. The massacre went on in several prisons around the counry but Evin and Gohardasht prisons particularly witnessed massacre in a much bigger scale. 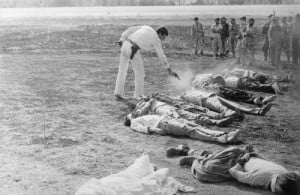 Around the first week of July in 1988 in Evin , as in Gohardasht, the television was taken away. Those newspapers approved for the prisoners were stopped, all visits to the infirmary were cancelled and any official calling of prisoners ceased. All visits by relatives, usually fortnightly, were cancelled. In fact, all the blocks were put on a ‘quarantine footing’. No one could enter. No one could leave.” Prisoners did not know what was happening and what was awaiting them.

Late in July 1988, Ayatollah Khomeini had to reluctantly accept the UN ceasefire to end the war with Iraq. Regime was well aware of the fact that when war is finished they will face mass protests by people who have suffered eight years during the war and were being forced by the regime to sacrifice thousands of lives and bear economic meltdown. Regime could no longer use the excuse of war to legitimize the unbearable social and economic living condition of millions of people, and it was in danger of facing mass unrests.

In the summer of 1988, when the massacre started, every day prisoners were taken to the “Death Committees” which were established in each prison and were consist of 3 or 4 of the most notorious prison and intelligent service officials. Prisoners were kept in an brutal conditions, tortured and then were put on 1-2 minutes military style “trial“ without being able to defend themselves. Meanwhile, all communications to and from prison, including visit from families, were halt. Geoffrey Robertson QC and human rights barrister describes this massacre: “Thousands of prisoners were blindfolded and paraded before the death committee which directed them to a conga line leading straight to the gallows. They were hung from cranes, four at a time, or in group of six from ropes hanging from the stage of the prison assembly hall. Their bodies were doused with disinfectant, packed in refrigerates trucks and buried by night in mass graves the locations of which were (and still are) withheld from their families”.

26 years have passed and the families of executed political prisoners still do not know where their loved one are buried. Every year, families attend Khavaran Cemetery to commemorate their executed children, even though these gatherings are not tolerated by the regime and they are often attacked by revolutionary guards.

Around 5000 political prisoner were tortured and executed in a period of month in 1988.