Nov 04, 2019 Politics, Slider Comments Off on Iraq and Lebanon’s protesters may achieve what Trump’s ‘maximum pressure’ could not

President Trump has long decried the effects of Iran’s influence operations beyond its borders. On the campaign trail, he embraced the rhetoric of Washington’s hawks, casting his domestic rivals as timorous enablers of an Iranian project for Middle East hegemony. 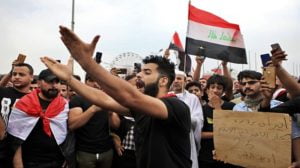 His decision to end American commitments to the nuclear deal forged between Tehran and world powers in 2015 was in part premised on the belief that the accord did not do enough to curb Iran’s support for proxy militias in countries such as Syria, Iraq, Yemen and Lebanon.

Since then, the Trump administration’s “maximum pressure” campaign of sweeping sanctions has strangled Iran’s oil exports and enfeebled its economy. But it’s hardly put a dent in Iran’s “malign” regional behavior. On the contrary, as a summer of explosive stealth attacks showed, the current confrontation has only emboldened elements within the Iranian regime to up the ante and defy Washington’s challenge. Even as ordinary Iranians endure the hardships that followed Trump’s measures, the sanctions have not compelled Iran’s Revolutionary Guard Corps and Maj. Gen. Qasem Soleimani, leader of the powerful paramilitary organization’s overseas arm, to scale back their activities.

But Soleimani’s agenda is nonetheless facing a serious threat — not via American confrontation, but popular unrest. Weeks of mass protests in Lebanon and Iraq have pitted an infuriated populace against an establishment they see as feckless and corrupt. The uprisings have also seen demonstrators openly reject the Iranian hand in their countries’ politics, which in both cases have democracies built around power-sharing agreements within diverse, multi-confessional societies.

And they’ve already scored significant victories: On Tuesday, Lebanese Prime Minister Saad Hariri announced his resignation, though he will stay on in a caretaker role as the government struggles to find a way out of a crisis it first sparked when it tried to levy a tax on WhatsApp phone calls. On Thursday, Iraqi President Barham Salih said that the government would overhaul the country’s electoral commission and draft a new electoral law — one of the demands of the protests — ahead of possible new elections. He indicated that Prime Minister Adel Abdul Mahdi, a target of popular ire, would stay on in his post only until a successor was identified.

Israeli air defense systems ‘on alert’ over fears of Iranian attack US envoy: Iran has spent $16 billion on militias in Iraq, Syria

On 3rd of January a news spread in social media regarding Qasem Soleimani and AbuMahdi Mohandes who has died by a US drone strike near Baghdad Airport and this was the end of their lives. In social media, especially Iranian users, there was a chaotic situation, some called of “the general of... END_OF_DOCUMENT_TOKEN_TO_BE_REPLACED