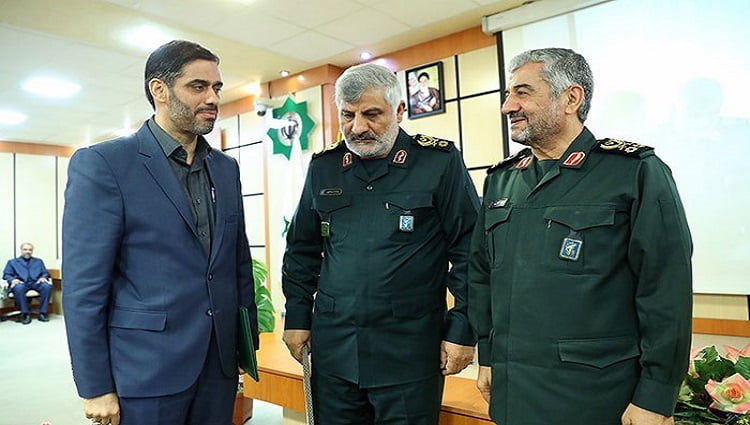 “We must hand over management to young forces and trust in them,” said Jafari during the inauguration ceremony.

Mohammad is the first IRGC-KAA Commander who does not have a military background. A PhD graduate in civil engineering from Tarbiyat Modarres Univ., he has years of managerial experience in subsidiary companies and institutions of IRGC-KAA and the IRGC Cooperative Foundation, according to Iranian media. The foundation in particular is a primary vehicle of the Guard Corps’ intervention in the economy.

From 2007-2014, Mohammad was the managing director of Sepasad Engineering Company, a subsidiary of IRGC-KAA. Sepasad is described by Iranian media as “the Guard Corps’ most important engineering arm” that has completed a variety of areas including tunnels and roads, metro lines, hydro-power plants, irrigation and water conveyance networks.

Mohammad was also managing director of Iranians Atlas Companies Group, which are six companies and subsidiaries of Ansar Bank – itself formed by the IRGC Cooperative Foundation. Radio Farda described the group as “the Sultans of building malls, modern complexes and aristocratic houses in Iran.” Iranians Atlas Companies Group has reportedly built 22 major projects in 10 cities.

In remarks during the inauguration ceremony, Mohammad said IRGC-KAA is looking to “identify existing vacuum and produce national wealth toward improving public welfare.” He said “that during a time of oppressive sanctions … we extend our hand of help to the administration to build infrastructure, activate the private sector and create jobs for youth.”

Mohammad’s appointment reflects a trend of appointments of younger managers at top positions in the IRGC, the Armed Forces General Staff and the Islamic Republic. Mohammad’s appointment in a top Guard Corps is position is particularly notable in that, unlike the commanders who dominate the IRGC’s commanding heights, his formative years were not in combat during the Iran-Iraq War (1980-1988).